Planet of the Rani 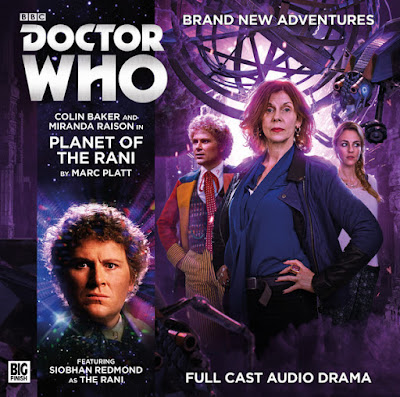 Planet of the Rani, by Marc Platt, had the function of telling two potentially quite interesting stories. As it's title suggests, it takes us to the Rani's little empire on the planet Miasimi Goria. Yet it also needs to tell us what happens to the Rani after she is caught and sent down to the clink at the end of The Rani Elite.

Marc Platt chooses to concentrate on the former and concludes the latter very quickly. He has the Rani being frogmarched to her cell at the beginning, then when the Doctor and his new companion, Constance Clarke arrive for her parole hearing, 47 years too late, she not only has the run of the prison, but has made herself the governor. Her final departure from Teccaurora Penitentiary is concluded at the end of the first quarter episode. I felt just a little cheated by this. The Rani being in prison is such an interesting idea that one feels one would like to see a bit more of it. The problem with The Rani Elite was that it had our favorite evil Time Lady basically doing what she had been trying to do in Time and the Rani. It was fun, but slightly stale. It was just another evil renegade Time Lord plot. A story about the Rani trying to break out of jail is exactly the kind of original and fresh story Big Finish needed to do to breath some life into their new incarnation of the Rani. Sadly, they blew the chance.

Has anybody forgotten that the late Kate O'Mara played an ex-con in Dynasty? It would have been a lovely tribute for Big Finish to have given us a Doctor Who prison drama. Over the years, Doctor Who has done James Bond, westerns, Star Trek parodies and Hammer horror. Why not Prisoner Cell-Block H or Bad Girls? It would have been so much more interesting to have seen the Rani interacting with cellmates and bitchy prison guards. With the invisibility of audio, they could do strip searches and shower scenes without any difficulties. Admittedly, the level of camp involved would have suited O'Mara's Rani rather better than the more restrained Redmond Rani, but Redmond shows the occasional camp flourish here and there.

Related to the brevity of the prison part of this story, is the problem of pace. The Rani's jailbreak occurs at a breathless pace. Once that part of the story is done and we go to Miasmi Goria, the pace of the story slows right down and we end up feeling like the story is an episode too long.

I'm not a fan of Marc Platt, yet he does have a strength which suits the story of Miasmi Goria. He is great at creating an interesting alien landscape to imagine when listening to an audio story, as he showed with Quinnis. The world of Miasmi Goria is a striking and interesting place; it has a real sense of location, with its dinner plate tree-statues and polluted air. Platt gives this something of the quality of an Hartnell story, with a peculiar and unknown world being explored. Interestingly, he says in the production interview that he tried to give it an exotic Indian vibe, going with the origin of Ushas' alias. This raises some interesting thoughts about the Rani, being a white woman with an Indian name. It makes her a sort of colonial memsahib. I think this takes away the potential racial awkwardness of the name.

There are some great things about this audio. Siobhan Redmond has really taken to the role and has made it her own. Colin Baker gives yet another fantastic performance as the Rani. I loved the moment when he imitated the Rani's Scottish accent. I do like the way that Dr. Who feels a sense of tragedy about the moral corruption of Ushas. I love the fact that the two characters have a history from their school days. We learn here about a crazy experiment that the two young Gallifreyans had attempted in their youth. Constance Clark, the Sixth Doctor's new companion is also fun. Oddly, she almost becomes a sort of companion to the Rani in this story.

I think this was a fairly enjoyable offering, but I can't get over my disappointment that more was not done with the prison aspect of the story. The Rani is a camp character. We need just a bit more fun in a story with her. Hence, it was a really bad choice to get Marc Platt to write this. Platt's stories are always serious and heavy going, which is entirely the wrong tone for a story about the Rani busting out of jail.

Posted by Matthew Celestine at 04:00