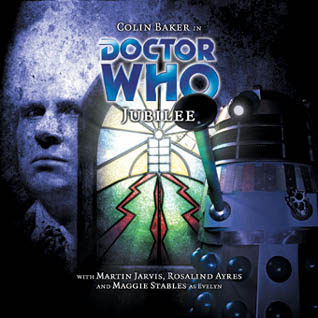 Jubilee is something of a fan favorite. Elements from this story were used to create the first Dalek appearance in the BBC Wales series, Dalek.

I have to say I was rather disappointed by this audio. It has some strong elements; the creation of a vivid alternate history, the conversation with the American president (if you don't mind a funny accent) and the way it makes one isolated Dalek into a sinister and disturbing figure. I also really love the hilarious teaser intro, which spoofs the Dalek Empire audios. Nevertheless, I was definitely pleased to get to the end of this one.

The biggest problem with this story is the failure of editing. Robert Shearman throws far too many elements into this audio. He gives us the isolated, defeated Dalek captive that worked so effectively in Dalek. He also gives us a complex story about alternate timelines, a satire of militarism and fascism, a biting critique of Dalekmania, an exploration of Dalek identity and some attempts at camp comedy. Attempting to bring in so many elements does not really work all that well.

Jubilee does not manage to integrate camp comedy and serious drama terribly well. While I like camp villains, the president and his wife Miriam comes across as a bit too cartoonish. Miriam's pretence at being stupid is really irritating and the moment when she asks the Dalek to marry her is so awful that it is embarrassing. Other excessively silly elements in the story include the ban on contractions in speech and the requirement of women to be in bed by midnight.

The story is rather excessive in violence. We get torture, decapitation and mutilation. I know its a hobby horse of mine, but Doctor Who writers are generally not going to win me over if they put in this kind of stuff. It's just too much.

The other big problem with this story is the way it overdoes the main message and starts to sound repetitive. The whole theme about 'people can be just like Daleks' comes up again and again. We get the message. Now can we have an exciting adventure with the Daleks?

If you want to see the original idea behind Dalek and want a very different kind of Dalek story, this is one to check out, but I did warn you about the gruesomeness.
Posted by Matthew Celestine at 03:13