A Good Man Goes to War 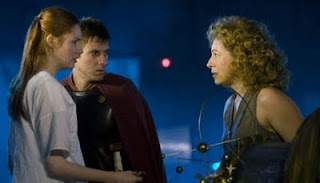 RT Davies, please come back. Next to this trash, your Journey's End is a model of coherent and thoughtful script-writing.

A Good Man Goes to War is simply a mess. Too many characters, too little time, hardly any plot whatsoever. Do we really need cameo appearances from the Spitfires and Captain Avery? I was a little surprised that Queen Elizabeth X was not thrown in. The characters that we get are cartoonish and silly. There is a complete lack of motivation in most of them.

Doctor Who does not work well as an action show. The Doctor is simply not a character who runs around shooting guns. Moffat does not get this, hence the regular use of the sonic screwdriver as a surrogate weapon. In A Good Man Goes to War we get an attempt to create a massive blockbuster movie experience. We get visual and musical references to Star Wars and the Lord of the Rings movies to aid this. Nevertheless, Doctor Who is simply not an action movie. Not only is this format unsuited to the Doctor's modus operandi, but the limited time of a Doctor Who episode means that all the action must be rushed. The strength of Doctor Who has always been in drama, and what little drama there is in this story is cloying sentiment and the Eleventh Doctor's predictable "You messed with my friends and I'm really angry" mode.

All the stuff about this war against the Doctor comes across as hollow. We have never had any mention of this before and we are given nothing to make it interesting to us. It is also pretty difficult to conceive of going to war against one man. How does one fight such a war?

The revelation that River Song is Amy's daughter is hardly much of a surprise. I can't say I care at all. How is it an interesting revelation? A character is interesting by virtue not of the facts about her, but because of how she interacts with other characters. That the Doctor is a Time Lord is not interesting in itself, but in how it affects what he does in the stories. River Song being Amy's daughter is no more interesting than River Song being anybody else's daughter, to make this of interest, we have to see how this impacts on her relationship with the Doctor and the other characters. Anybody want to place a bet that the Eyepatch Lady turns out to be the Doctor's mother?

Interestingly, Moffat has decided to re-write Time Lord history. We learn that Time Lords are the way they are because of exposure to the time vortex. Nothing to do with Rassilon and the vampires then?

The Fat Gay Anglican couple were an embarrassment. The BBC Wales has an irritating habit of implying that contemporary British liberal values are some kind of universal norm. Even if one is a supporter of the pro-gay agenda this kind of shallow perspective does one no favours. Pretending that people in all times and places really want to be trendy liberals does not advance anybody's rights.

This mid-season finale is simply awful and to be honest, painful to review.
Posted by Matthew Celestine at 03:52