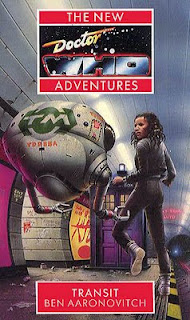 "In the rainy season when the rain rattled off the corrugated iron roof Kadiatu would sit with her father and listen to his stories. Many of them were about the first grandfather and his adventures with the Shirl, back in the days when the family lived on an island in the north. The Shirl was like Mr Spider, facing danger with guile and cunning always outsmarting his enemies. When Kadiatu grew up she wanted to be like the Shirl but her father said no, only the Shirl was like the Shirl.

So Kadiatu grew up with stories about the metal giants, the wicked machines and the spiders that could think. Later in the vast history archive under Stone Mountain, by the Cayley plains on Lunar, she learnt that every last story was true. In themne, the language of her parents, Shirl was the word for medicine man, for magician, for doctor."

Reading the Virgin New Adventures got me interested in Cyberpunk fiction. I read William Gibson's Neuromancer and was completely baffled by it. I could not make head nor tail of what was actually going on in that book. Transit is not nearly as incomprehensible as Neuromancer, but it is still a difficult book. The narration is sparse to non-existent, the grammar is odd and it is full of future slang. Aaronovitch does provide a glossary at the back, but it is still not comprehensive enough to completely equip one for reading the novel. Transit is a book that vitally requires a second read to be fully appreciated.

Some of the best of the Virgin New Adventures are difficult books to read. Timewyrm: Revelation, with its layers of reality is a difficult novel. Nevertheless, it has real literary depth and fundamentally shaped the direction of the New Adventures. Cat's Cradle: Warhead, with its minimal dialogue also needs a second read to be appreciated, but it is well worth the effort. The Pit, that depressing tale of Lovecraftian cosmic misery is painful reading, but contrary to what you may have heard from other fans, I highly recommend giving it a try. Blood Heat is not easy reading either. Transit is yet another NA novel that is hard to digest but full of rich and intelligent ideas.

Transit caused a lot of controversy because of the adult nature of its material. Perhaps the heavy violence might not be a shock after Hinchcliffe and Saward, but Transit was the first official Doctor Who product to use the F-word. The first NA, Timewyrm Genesys had referred to sex and featured a child prostitute. John Peel probably though he had been really radical after writing all those Target novelisations. Transit goes a lot further and gives quite graphic descriptions of sex. I am an Evangelical Christian, so obviously I don't approve of all this. Nevertheless, I understand why Ben Aaronovitch felt the need to include this graphic realism. The NAs were really pushing to make their range distinct from the more child-friendly Target novelisations. There was also a desire to imagine the Doctor Who universe as a real place populated by people who had sex and used bad language. To be honest I am less bothered by Ben Aaronovitch describing sex in detail or having Benny use the F-word than I am of Hinchcliffe featuring some very gruesome deaths during his producership or Big Finish putting in descriptions of horrible mutilation and torture in Project Twilight.

Taking some of the staples of the cyberpunk genre, Aaronovitch creates a very real world in Transit. He brings to life the lives of the characters quite vividly. The story is fleshed out with the details of future history, with social observation and those essential small details like the Kwik Kurry franchise. This world is a grim place, where corporations wield massive power and economic misery have ruined countless lives. It is also a post-war society, with the final defeat of the Ice Warriors in the Thousand Day War a recent memory. The Ice Warrior nest is not really necessary to the plot but it is a quite wonderful element, as is the opera inspired by Battlefield.

Transit seems to be set some twenty or so years after Seeds of Death. There are some quite strong connections between this novel and that serial. We have the heavy Ice Warriors, a mass transit system, a lunar colony and references to starvation. It is quite impressive how Aaronovitch builds on the world of Seeds of Death to create his own bleak vision of the future.

This is very much a book about poverty. The author does a fantastic job of capturing the lives of prostitutes, the squalor of overcrowded housing, the filth of urban living, the death of hope and dreams in the young and the reality of malnourishment and hunger. This is a truly left-wing book. Readers might have guessed by the link to the Tory party on this blog that I am a bit right-wing. I may be right of centre in my own politics, but I generally like Doctor Who to be left-wing. I think it is important that Doctor Who challenges society and challenges the establishment.

One of the things that I love about the New Adventures is how politically correct they were. Back in 1992, we Tories were still in power, inflicting misery on poor lefties like Aaronovitch and Equality was not big on the agenda. It was actually considered radical to be seriously concerned about racism. Ben Aaronovitch had introduced a new brigadier in Battlefield who was both black and female. My biggest shock when I re-watched Battlefield was that there was not a trace of irony about it. These days you can be sure that this move would have been accompanied by some ironic humour at the expense of the now unfashionable political correctness. In Transit, Aaronovitch continues his politically correct agenda by giving the Brigadier a whole line of descendants in Africa, the fruit of a liaison he had with a local woman in Sierra Leone. Thus we have Kadiatu Lethbridge-Stewart, a great new character who is really quite likable.

Despite being a massive NA fan, I don't care much for Benny. I quite liked her in this novel. She is not her normal self through most of it, being under the possession of the alien intelligence. Both her possessed persona and her struggling real persona are fun to read. The Doctor is very well written here. He is philosophical and moody, but without any excessive angst. He still shows the old manipulative tendency that we enjoyed so much in Seasons 25 and 26.

The basic plot about the sentient computer virus is reminiscent of various Doctor Who stories about computers going rogue, but the surreal final confrontation in cyberspace is genuinely original. I also like the scary transmogrified humans that the sentient virus creates. The description of them as 'cake monsters' is really freaky.

There is a real sense that the author is doing challenging things with Doctor Who. Like Lawrence Miles' books, there is that edgy, unnerving feeling to Transit. We fans must never get complacent with the show and retreat into the comfort of loving stories about old monsters and villains and tried and tested plots. It was books like this that demonstrate the real creative energies that were at work amongst Doctor Who writers during the wilderness years.