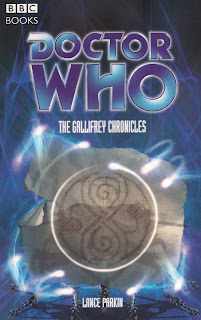 "My dear, one of the things you'll learn is that it's all real. Every word of every novel is real, every frame of every movie, every panel of every comic strip."
This novel was the last in the series of BBC Eighth Doctor novels. Lance Parkin was given the Herculean task of providing a conclusion to the various mind-boggling story arcs of this series. How Parkin did this is quite surprising. Rather than giving us a big epic event novel as one might have expected, he wrote a light and slightly fluffy novel with a very easy-going plot.
The result of the lighter tone means that the BBC novel series is able to end on an upbeat celebratory note. In every way, The Gallifrey Chronicles celebrates Doctor Who. There is a real sense of magic in the way that the Doctor appears to bring the dead back to life and reunite families with their apparently deceased loved ones. Likewise, the cliffhangar ending, with the Doctor leaping into action to deal with the monsters, for all its uncertainty is a celebration of just what the show is about.
There is a good deal of meta-textuality going on in this story, with the reference to John Peel's goof about Ace being in Paradise Towers, the Doctor being sent to sleep by reading about Gallifrey and the glorious line about every spin-off being true. This very much fits with the agenda of the book being about celebrating Doctor Who. There are also hints in the book of Parkin's frustration at the complexities and problems of continuity. If he it is true that 'every panel in every comic strip' is real, it would have been nice of Parkin to include the TV Comic stories in his majestic AHistory. It seemed a bit mean to me to include the DWM comics but leave out all those wonderful Sixties adventures with John and Gillian.
In Marnal, Parkin offers a really interesting character. Like the Doctor, he has been exiled to earth. Yet unlike the Doctor he feels only contempt for humanity and is obsessed with returning to Gallifrey. There is a strong touch of William Hartnell's Doctor about him and in his attitude and methods he does resemble the Doctor in An Unearthly Child. Marnal is the Doctor as he could have been. He ends up being paired with an human companion, his nurse Rachel. Rachel is well characterised and it was surprising that she did not become a new companion at the end.
The BBC range had already given us the disastrous Ancestor Cell and Parkin had to tie up the loose ends created by that book. The Gallifrey Chronicles provides a flashback to the Doctor destroying Gallifrey. This flashback is a much stronger scene than anything that occurred in The Ancestor Cell. The Gallifrey Chronicles offers the possibility of Gallifrey and its inhabitants being restored (only to be destroyed in the Time War, if you believe the BBC Wales series).
The alien menace, the Vore are oddly incidental to the plot, despite appearing to wipe out much of the Earth's population. They are rather scary and what they do is quite disturbing, but their main role is simply to show the Doctor shine at what he does best. As I said above, the way the Doctor appears to bring back the dead is just magical.
We are also treated to a scene on Gallifrey which features the Doctor's parents. Yes, the Doctor's parents. Those who had read The Infinity Doctors will be already aware of Ulysses and Penelope, the Doctor's mother and father. I'm not at all happy with the idea of the Doctor having a human mother, but as the idea has been done, I feel I might as well accept this admittedly rather intriguing couple as the Doctor's parents.
The Doctor's companions Fitz and Trix form a relationship in this story. This is quite believably done, if a little sudden. There is, however, a note of sadness to this as revealed by Fitz's song 'Contains Spoilers.' The Gallifrey Chronicles does not give any answers to Trix's past. We know she is wanted for murder, but did she do it? This is just a small fault I have with the novel.
The Gallifrey Chronicles is a lovely upbeat conclusion to the 8th Doctor novels.
Posted by Matthew Celestine at 04:19