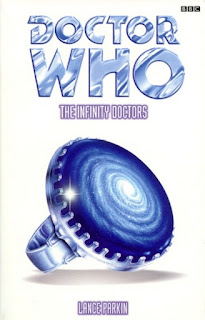 'The Doctor closed his eyes. This was her, there was no possible cause to doubt that now. She had lived so much longer than him, lived at his Family home for countless generations. She had tutored his grandfather and his father. She had been there at his birth. She had nursed him, taught him, danced with him, loved him, borne his children.'
Aesthetically, I rather wish this had been the last Doctor Who novel ever written. This novel shows us the Doctor on his own planet, shows him choosing wandering over a contented life on that planet, it shows the Doctor's great strengths and desire for justice, yet it also shows us the woman he loves who bore his children; it is the ultimate glimpse into his personal life. This is a Doctor that we can relate to and also a Doctor that we can celebrate and delight in.
The Infinity Doctors is unique among Doctor Who novels in that it is never made clear which Doctor is the protagonist. His close-cropped hair sets him apart from all of the Doctors except Ecclestone. His dialogue suggests the Eighth Doctor, but his oval-shaped face could suggest a younger Hartnell Doctor. I personally dislike the notion that the Morbius faces were pre-Hartnell incarnations so I don't accept the notion that this is an unknown older incarnation. It has been suggested that this is novel is set on a resurrected Gallifrey after the closure of the BBC novels, but the presence of Hedin and the apparent friendship between the Doctor and the Master (the Magistrate) does not support this idea. I prefer to see this Doctor as a pre-Unearthly Child First Doctor before his exile from Gallifrey. This Doctor is not the rebellious student some have imagined, but rather a respected academic who serves on the High Council.
One of the clever feats of this book is the way it puts together everything we have ever been told about the Time Lords. Every Time Lord story is referenced in some way. Lance Parkin admitted that a consequence of this was that inevitably these details contradict different stories in different ways. The story of the Time Lords was never written with continuity in mind and this book does not try to give us a story that fits into any watertight continuity. It is tempting to see this as an 'Elseworld' or 'Unbound Adventure' in which the Doctor has given up travelling and gone home to Gallifrey, but this was not Parkin's intention and I think this detracts from the beauty of what The Infinity Doctors achieves. The Doctor in this novel really is the Doctor.
One of the things I love about this novel is the way it restores grandeur and nobility to Gallifrey. The Gallifrey we see here is an imperfect society (we see crime and squalor in Low Town), but it is not the cynical totalitarian regime of The Deadly Assasin. This Gallifrey is a place of beauty and grandeur, but even more importantly, it is a place in which the Doctor is respected and loved. This actually fits in better with what we know of the Doctor then the Holmseian vision. The Hartnell Doctor really did hope to return home to his world of silver trees and burnt orange skies. He would never have wanted to return to the degeneracy and corruption of the Deadly Assassin Gallifrey. Readers know how much I detest the BBC Wales series, but one of the things they did right was to throw out the Holmes cynicism and to make Gallifrey seem like a wonderful place that was tragically lost. The Time Lords of this Gallifrey are not he god-like figures of The War Games or the Lawrence Miles books. They are also conscious of their own temporality. They are well aware that Gallifrey will not last for all eternity.
The plot of The Infinity Doctors is not the strongest we have read, but it is exciting. Incredibly, this novel offers us a reworking of The Three Doctors that is much better than the original. How this incident fits in with the Pertwee story I can't say, but it's very good. We also get to learn a good deal about the history of the Sontaran/ Rutan war, with the Doctor involved in negotiations between the two races. We are promised that one day the two peoples will be at peace.
She was wearing a loose-flowing gown in ivory silk and lace, with bare shoulders, gathered at the waist by a wide belt. Her long blonde hair was held up by a gold clasp, and swept down to the small of her back. She wore a necklace of white flowers, and held a feather fan. She was his height, a little taller as her feet were bare, and he was wearing shoes.
In this novel we meet the Doctor's wife, not the TARDIS and not that cardboard tart River Song, but the woman who bore his children. This is the same character as Patience who Parkin introduced in Cold Fusion. She was shot dead, but brought back to life in Omega's universe. This lady is definitely somebody we can imagine being the Doctor's wife. She is mysterious and ethereal, like a woman in a Pre-Raphaelite painting. That the Doctor had several children supports the notion that he might have had more than one grandchild, hence the possibility of John and Gillian being canon. It is difficult not to suspect that Parkin has something of a foot fetish; the Doctor's wife is barefoot and the other female character, Larna is barefoot for most of the book.
This is a book that blew me away with its beauty, its depth and by its delight in the details of the show. If you read any Doctor Who novel, read this one.
Posted by Matthew Celestine at 07:44