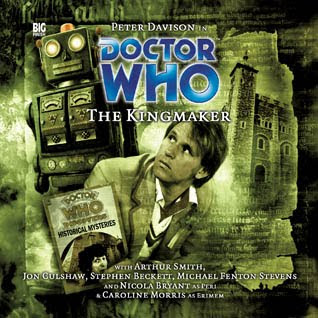 To my mind, the 5/Peri/Erimem series is among the strongest of Big Finish developments. The stories that this team have been given have a real sense of fun and excitement that makes a strong contrast with not only the televised stories of the Fifth Doctor era, but also other Fifth Doctor audios released by Big Finish. The Kingmaker is the most comedic of Peter Davison stories. This is not just funny; in places this audio is roll around the floor funny. Davison does not attempt to be overtly comic as Colin Baker or Sylvester McCoy do in The One Doctor and Bang-Bang-a-Boom-Boom, but plays it straight. His dry performance adds a lot to the fun of this hilarious script.
There is a slightly new series feel to this story. It's Bill and Ted theme park view of history reflects how the new series approaches historical stories. To be honest, I was very irritated by the anachronistic modern dialogue used by the characters, though the setting has been more carefully researched and thought out than it would be in a new series story. In a hilarious nod to BBC Wales, Richard III, played by Stephen Beckett sounds remarkably like Christopher Ecclestone, so much so that I actually had to check the CD case to make sure it was not the man himself. Beckett uses all the vocal mannerisms of the 9th Doctor and even says 'fantastic!'
Despite the nods to the new series, The Kingmaker is very nostalgic. A laser-wielding robot from the far future demands that the Doctor completes a series of children's books before they miss the publisher's deadline. These are in fact a real series of books that attempted to cash-in on the series back in the Seventies. We are treated to a brilliant impersonation of Tom Baker courtesy of Jon Culshaw from Dead Ringers.
The plot is extremely complex, being set in different time periods and involving multiple twists. While it is very gripping and full of surprises, I can't help agreeing with people that it does try to be just a little too clever. While nobody would have expected the conclusion, it does feel just a little too bizarre to be true. That said, the writing and the script are of a really high standard. It would be wonderful to see this kind of quality on the televised show.
As mentioned above, Stephen Beckett's Richard III has a strong vocal resemblance to the 9th Doctor. I'm not sure this was entirely for comic purposes, or just because he was a northerner. There is something of a similarity in that both characters have a strong sense of world weariness, but also a hardness and sense of purpose. This Richard III is very far from Shakespeare's version and has real depth. Not a villain, but a man who is prepared to be ruthless. I found it amusing that he is used to getting time travelling visitors. Apparently each of them offered an opinion on whether he should kill the princes in the tower, even before the situation had arisen. Thus, he is a man who knows his own fate in advance. It is interesting to ponder whether other historical characters in the Whoniverse might have had a similar experience.
Together, Caroline Morris and Nicola Bryant deliver one of their best double acts as Peri and Erimem in this story. These girls are great; completely different in their cultural background yet as close and as argumentative as sisters. Peri acts really stupid throughout this story and Erimem amusingly gets annoyed by her idiocy. That's the real charm of Peri for British fans; she comes across exactly as how we would like to imagine American girls- spoiled and a bit thick, but essentially benign and very cute. Not that real life American girls conform to this stereotype at all. There is a touch of Leela to Erimem in this story. In a very impressive moment, she suggests to Peri that the two should kill each other to prevent history being altered. When Peri is absolutely terrified by the suggestion, Erimem claims to be joking, but had in fact been serious.
The Kingmaker is not quite a perfect audio play, but it is one of the strongest audios they have done; hilarious, innovative and distinctive with a real affection for the history of the show.
Posted by Matthew Celestine at 03:50