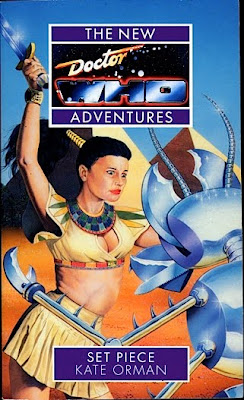 I found Kate Orman's Left-Handed Humming Bird a little on the heavy-going side, so I was a bit worried about this one. Nevertheless, as it is Ace's departure story (one of them...), it was pretty essential reading. I was pleased to find that it is a much easier read than Left-Handed Humming Bird and much more enjoyable, while still having all the Hurt/ Comfort elements that Kate Orman seems to love so much (amusingly she actually entitles one chapter Hurt/ Comfort!).
The opening chapter is remarkably disturbing. A woman is forced to participate in brutal surgical procedures against her will, along with other humans. For three weeks she has been participating in the torture of an escape-prone prisoner who turns out to be... have a guess. As with Kate Orman's previous novel, Set Piece is a novel that deals with real physical, as well as emotional pain.
Set Piece sees the return of Kadiatu Lethbridge-Stewart, the very likable character introduced in Transit. She is effectively re-introduced without tedious exposition. She comes across as an highly-intelligent, but also a very dangerous character. She has now mastered time travel, with terrible consequences.
Kate Orman clearly loved the character of Ace and in this novel she gives her depths that have not been matched in any other New Adventure novel. This is a truly mature Ace. She is not the confused teenager, but neither is she the thuggish and mentally scarred veteran that we see in previous New Adventures. Set Piece has Ace stranded in ancient Egypt and adapting to new circumstances, while at the same time having a profound self-consciousness about her role in them. Finally, she becomes a sort of Time's Champion, protecting earth from menaces created by rifts in time. It might have been nice to have seen Ace become a Time Lady, as was originally planned, but this is a strong departure for her too.
My favorite part of the book was the parts set in ancient Egypt and Ace's interaction with that culture. It felt very authentic, much more than the attempts of some other writers to do ancient Egypt. The stuff with the Paris Commune was also interesting, even if my conservative instincts are irritated by Ace siding with the revolutionaries. I was a bit irritated by the presence of a number of dream sequences. They are quite well done, but dream sequences in the Virgin books have been done to death. It is very much an NA cliche.
The Doctor is very well written here. Kate Orman very much goes for the NA Time's Champion interpretation. Accordingly, she makes him quite god-like, yet at the same time quite vulnerable. With the presence of Kadiatu and the focus on Ace, Benny still manages to have an interesting part to play in the book. She is perhaps less irritating than in other novels, but I still dislike her overconfidence.
The plot about metallic ants taking advantage of time rifts is very much secondary to the character studies going on. The plot is simply there to develop the relationship between the Doctor and companions. Regrettably, the threat is apparently to the whole of time itself (a very Moffaty trope). I really dislike stories in which the entire universe is threatened. It just reduces the scale of the Doctor Who universe and is never really believable. We might also ask why the Time Lords don't deal with a threat to 'time itself.'
This is a novel about history. It is about how history is paved with suffering and tragedy and so often feels futile. It is about how individuals relate to history, playing their part and ultimately being unable to alter its course. Yet the novel urges the notion that every struggle, every battle, every tear shed really does mean something whatever the outcome.
Set Piece was a massive improvement on Left-Handed Humming Bird and is a great example of how angst can be done really well.
Suggested soundtrack: Nocturnus- The Key
Posted by Matthew Celestine at 02:57