The Doctor : "You are now travelling through time and space."

Perhaps a good deal of charm in watching this story today is that they don't make anything resembling this these days. Historical adventures are pretty much a dead genre. There are historical dramas with lots of emotion and serious themes, but historical adventures with lots of swashbuckling, black-hearted villains and hidden treasure are a thing of the past. I have never actually seen any of the Pirates of the Caribbean movies, but the impression I get is that they are more in the realm of fantasy than historical action adventure. Perhaps it is a little surprising that this jolly pirate story was followed in the same season by The Highlanders, which is essentially another pirate story. While this story is on the surface a more light-hearted story than The Highlanders, it is apparent that the Troughton story is treated as more of a comedy, particularly in the lead actor's performance. While The Highlanders is enjoyable, the comedy feels out of place in such a dark story, while in The Smugglers, is able to tell an exciting adventure, not quite a comedy, but with a keen sense of fun.

The most obvious difference between The Smugglers and The Highlanders is that the latter provides a swashbuckling pirate adventure that arises from its historical setting, while the former makes no real use of it's historical location (other than the frequency of smuggling in that era). The Smugglers would not have looked out of place in the Colin Baker, with a change of setting to a far future space colony and the pirates as thuggish Sawardian types. It has to be said that the 17th century offers an awful lot of missed potential for historical stories, with events like the Civil War, the Monmouth Rebellion and the Glorious Revolution. One of the really sad things today is the lack of awareness of this period. Our schools teach kids about the Nazis and Henry VIII, but seem to miss out on this much more fascinating period of English history. Likewise film and television producers are fixated with the Tudors and seem to forget about the far more interesting Stuarts. 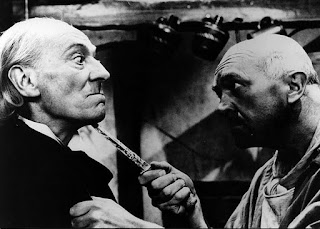 Obviously we don't know quite what this looked like, as no episodes survive. Nevertheless, given the BBC's talent for producing great historical drama, we can imagine that this looked quite fantastic. Judging from the audio recordings, most of the performances are pretty impressive.

This is the first story with Ben and Polly as companions proper. I love the way that the Doctor explodes with rage when he finds them aboard; there is something adorable about the way the Furst Doctor lost his temper. After they have left the TARDIS it becomes clear that he is coming to accept the arrival of young strays as routine.

Ben and Polly are a glorious companion team. It's tragic that they have only one completed story in the archives. Ben is tough and heroic, but not in the rather stiff Dan Dare mode of Ian Chesterton. As much as I love the original TARDIS team of Season 1, the cockney sailor is a good deal more fun than Ian. Polly is simply delightful. Her Received Pronunciation makes her seem as though she is from another world. Oh for the days when middle class girls spoke properly! Regrettably, the writers were never very consistent in their portrayal of Polly, even within the same story. One moment she is bold, confident and resourceful; another moment she is whimpering at the sight of a rat, as she does here.

One difficulty of this story is how little Ben and Polly seem to take it seriously. They adjust remarkably easily to the realisation that they have been transported to the 17th century. Then when locked in a dungeon, having been accused of murder, Polly talks about how much fun she is having! We could look to the philosopher Baudrillard and say something very postmodern about this. We might suppose that if a person from the Sixties who was used to watching swashbuckling ITC historical adventures were to be transported to the 17th century and placed in the midst of vicious pirates, she might indeed treat this as only a virtual reality equivalent of what she was used to seeing on the television or in the cinema.

There is no complex characterisation here, but we do get a wonderful cast of characters, the vicious Cherub, Longbottom, the creepy church warden, the corrupt squire and the remarkably heroic taxman, Blake. These people are so colourful!

This is not deep and educational like The Massacre or full of emotional drama like The Aztecs, but it is a wonderfully fun escapist adventure story. I doubt that any future Doctor Who producer will ever make anything like this.

Posted by Matthew Celestine at 07:25