The Massacre of St. Bartholomew's Eve

"And now, they're all gone. All gone. None of them could understand. Not even my little Susan. Or Vicki. And as for Barbara and Chatterton - Chesterton - they were all too impatient to get back to their own time. And now, Steven. Perhaps I should go home. Back to my own planet. But I can't... I can't..."
As with The Highlanders, I used the YouTube recon of DrWhoAnimator. These animations are not very good quality, but this person has gone to the trouble of animating all the lost stories, which deserves respect. So far 2Entertain have only given us one DVD featuring animated lost episodes, with one forthcoming.
If the producers of Doctor Who had continued to make serials like The Massacre into the Troughton era and beyond it is safe to say that the public image and reputation of Doctor Who would be completely different. It would not be thought of as a show about tinfoil or bubblewrap monsters, but a much more sophisticated and intelligent show. The Massacre is utterly removed from the silliness of the last two seasons, so far that it is practically a different show. In the unlikely event that Moffat or a future producer decided to make a proper historical, it would be very different to The Massacre. It would no doubt be set in a well known historical setting like the reign of Henry VIII and it would be a comedy.
The Massacre was made for a more historically literate generation than ours. Back then, a lot of school children would have been taught about the Massacre of St. Bartholomew's Eve at school, instead of sitting through endless pointless lessons about the Third Reich. The Massacre assumes that its viewers have a certain basic knowledge of history and also presumes that they are willing to learn a good deal more. History is presented in its full depth and not treated as a Bill and Ted style theme park in the manner of the BBC Wales series. Of course, this means that the viewer has to make a bit of effort and concentrate when watching this serial. It is not easy to keep up to speed with the large cast of characters and the intricacies of the political machinations that are discussed in the dialogue. Clearly the writer of this story expected just a bit more from his audience. 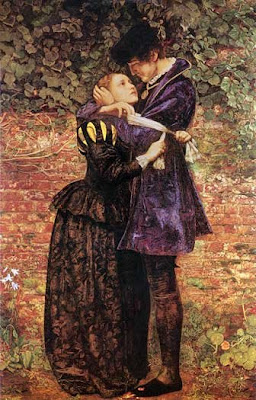 The Huguenot on the Eve of St. Bartholomew, by Millais
The Massacre offers some serious historical drama with a lot of tension and excitement. It is also a Doctor-lite story. The Doctor remains absent for much of the story and we are left to wonder what he is up to. Could the Abbot of Amboise really be the Doctor in disguise? Often removing the Doctor from the action reinforces the power of the Doctor as a force. With the absence of the Doctor, Steven is driven to the centre of the action as a man bewildered, out of his time and hopelessly entangled in the complexities of a society he does not really understand. Peter Purves delivers a really powerful performance. While this is Peter Purves' story, Hartnell does not fail to impress. By taking on the extra role as the Abbot, he proves that he really could act. Perhaps it is a little disappointing that the Abbot did not get a few more scenes. What is interesting is how both the Doctor and the Abbot both make themselves absent from their associates and work behind the scenes. They are similar not only in their appearance, but in their mysterious roles in this serial.
This is one of the bleaker Doctor Who stories. Not only do we see the inescapable climax with the start of a massacre, but the unwillingness of the Doctor to interfere and to save one life. Yet Doctor Who should always offer some sense of hope or optimism, as with Curse of Fenric, where Ace's mother is saved from death as a baby. One of the failings, in my judgment, of Pyramids of Mars is the lack of any upbeat element in that story. In this story, we get the introduction of a bright and cheerful new companion (I know some fans dislike Dodo, but I think she is lovely) who offers the hope that she is descended from Anne Chaplet. There is the fan theory that Steven and Anne made love during this story and Dodo is in fact a descendant of Steven. This has a certain romantic appeal and should not be discarded, despite the obstacles that Lawrence Miles and Tat Wood point out in the About Time guide.
Like the cruelly maligned Warriors of the Deep, The Massacre is one of those stories that makes you curse the Doctor. The Hartnell Doctor was always a good deal less cuddly than other Doctors, but here the viewer is disturbed by his callous disregard for the safety of Anne. The Doctor is alien to us; it is always a mistake to get too comfortable with his character. The Doctor has seen many horrible and violent events in history; the death of one young woman will not trouble him in the way it troubles Steven. Yet after Steven's angry departure we are made to sympathize with the Doctor, left alone for the first time in the series.
The Massacre is significant in terms of continuity. As improbable as it might seem, the First Doctor stories in the TV Comic most likely take place during Steven's brief departure from the TARDIS. The Doctor tells us that he cannot go back to his own planet, so where does he go? I believe he goes to find his two other grandchildren, John and Gillian and before returning for Steven has a number of adventures with him, including battling Kleptons and meeting the Pied Piper and Santa Claus. Well I think they're canon, even if nobody else does.
As a Protestant Christian I see the massacre of St. Bartholomew's Eve as an important part of my heritage and am glad that Doctor Who used this as a source of inspiration. This is story is a brilliant example of just how sophisticated and intelligent Doctor Who could get.
Posted by Matthew Celestine at 06:04