I watched this animated recon of The Highlanders on YouTube. It's pretty poor animation, but it's better than staring at still photographs. The similarity to the Captain Pugwash cartoons is rather appropriate given that this is a pirate story.
I fondly remember reading the novelisation of The Highlanders when I was nine years old. Unlike Jamie, I liked Redcoats a lot, so it had natural appeal. A year later, I persuaded my parents to take me on holiday to Inverness, so I could see Culloden and Loch Ness (for Terror of the Zygons). I had a copy of Travel Without the TARDIS at the time (remember that book?).
It is unfortunate that so much Season 4 was lost because it is a much more interesting season than Seasons 5 and 6. At this point, the Troughton era had not yet turned into a routine of monsters and bases under siege. There is a diversity to this season that was entirely missing from the next, made up for only partially by the James Bond experiment of Enemy of the World. Making some more historicals in Seasons 5 and 6 would have injected some much needed variety into the Troughton era.
Rather than giving us a story about the battle of Culloden itself (which would have looked pretty awful with four Redcoats and four Highland rebels), The Highlanders serves up a good old-fashioned pirate story with swashbuckling and keelhauling. Everybody loves a jolly pirate story; it's perfect for light entertainment. The Highlanders delivers exactly the right mix of historical adventure and comedy. It is also a perfect story to showcase Troughton's broad range of acting ability by having him put on various disguises. It is rather a shame that the Doctor so rarely gets to operate like this, because it is quite hilarious. Of course, this is early Troughton, with him not quite settling on the persona that would see him through the next seasons, but he is a wild and anarchic figure who never fails to bewilder his opponents and entertain the viewer. 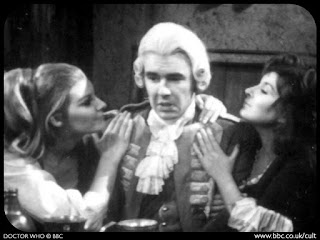 Both Ben and Polly are served well by this story. Ben is highly entertaining doing his cockney sailor routine amongst a bunch of Scots. This is perhaps Polly's strongest story, with her showing initiative and daring in capturing and blackmailing Ffinch. It is unfortunate that in other stories she is left to whimper at monsters or serve coffee. She has a great rapport with Kirsty. Kirsty is hilariously dumb and one actually sympathizes with Polly when she calls the girl a 'stupid peasant.' Polly's received pronunciation is quite delightful to listen to. Wouldn't it be nice if middle class girls spoke properly like her these days? According to a transcript, Polly has trouble running in her heeled shoes and kicks them off to go barefoot, like Romana 1 in Stones of Blood. You can't tell this from the audio or the photographs, so it might not be correct, though she did the same thing in the novel The Murder Game. Polly and Romana 1 are unusual companions in having footwear trouble. Tegan, Peri and Jo never had any trouble running or climbing in heels. The BBC Wales costume designers seem to be sensitive to this and always put female companions in sensible footwear (as well as some of the most boring and unimaginative costumes ever).
A lot of the guest cast slip into standard historical tropes and stereotypes, but that is what you expect in a light-hearted historical drama. With a pirate story, you need a wretched scurvy seadog captain like Trask and a gentlemanly officer figure like Ffinch. The production values for this story on the whole appear pretty high, with some enchanting location filming and studio sets that look pretty decent. It is tragic that this was the last proper historical, as it is a great example of the strengths of the genre.
Posted by Matthew Celestine at 06:37