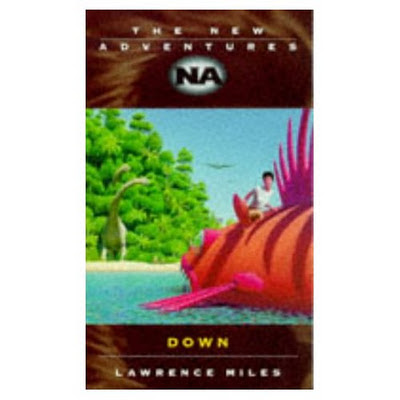 Despite loving the Virgin Doctor Who novels, I really dislike Bernice Summerfield. She has always come across to me as too clever and confident, as well as horribly self-righteous. That tends to keep me from taking much interest in the vast range of Benny Summerfield spin-offs released by both Virgin and Big Finish. It does seem that unlike me, Lawrence Miles likes Benny. He writes well for her, though it did not make me like the character any more.
This is of course Lawrence Miles' second novel. He had not yet become the legend that we know. In Down we see Miles' enthusiasm for world-building, his love of deconstructing tropes, playfulness with language and flirtation with intellectual concepts. Yet he has not started his career of shaking fictional universes to the core and rebuilding them in twisted form. That would be seen in his second Benny novel, Dead Romance, which would be re-released as a supplement to the Faction Paradox series.
Down is not as accessible to the new reader as Dead Romance. Down is far more closely tied to the continuity of the other Bernice Summerfield books. In particular, Down is part of a story arc regarding a super-advanced race inhabiting a Dyson Sphere called 'The People.' The parts of the book that deal with this arc are perhaps the least interesting aspect of the novel.
Down offers two likable supporting characters in the persons of Benny's two student's, Ash and Lucretia. While these are great creations, I don't get reviewers who say that Miles' other books lack interesting characters. Christina Summerfield in Dead Romance is just as strong, as is Homunculette in Alien Bodies. The action hero Mr Misnomer is amusing, particular in his discussion of his own character guidance notes! I am not at all keen on comedy Nazis, but Miles a reasonably good job with the Neo-Nazi character Katastrophen.
Unusually for a Miles novel, this is an action adventure. Of course, it is all a big send-up of all the cliches and tropes of pulp science fiction and fantasy. We get a hollow planet inhabited by an ecosystem with Dinosaurs, ape men and Yetis. I am a little reminded of Terry Pratchett's books. It has the humour, the playfulness with language, the mocking of tropes, the likable characters and the hard science fiction concepts. Like Terry Pratchett books it all gets a bit confusing towards the end.
As with all Miles books, there is a strong postmodern streak running through the narrative. Much of the story is told through the recollections of Benny as she is interrogated. Given the inconsistencies in the story and the impossibility of her having access to the interior thoughts of the other characters described there is a huge question over the reliability of the whole story. We are even give the perspective of a criminal psychologist who offers his commentary on Benny's account. Alongside the usual postmodern literary theory on display, Miles' favorite intellectual concept in this novel seems to be Jung's theory of Archetypes.
I like the handling of the subject of transmat technology, with Lucretia's conviction that she dies during the process of molecular dispersal. Miles makes a brilliant statement:
"The machines could easily copy you without killing the original, but they were programed to slaughter you first, because the hardware companies didn't want to rock the economy by letting people know you could produce exact copies of valuable objects out of thin air."
I have never found the idea of matter transporter technology very believable, mainly because the idea that you can create an entire living, breathing, conscious human being. Even if the same matter is used the process of putting all the parts together must be impossible. If you can do that, you can do anything. You could instantly manufacture any piece of machinery, no matter how complex. Hunger would no longer be a problem as you could produce entire herds of livestock. Species would no longer become extinct, because you could always replicate new members of the species. I know they have replicators in Star Trek, yet the characters always complain that replicator food does not taste the same as real food. If Worf or Picard coming out of the transporter is the same as the Worf or Picard that went into it, they could surely replicate food that tastes exactly like the original.
Down is not one of Lawrence Miles' grand cosmic operas, but it is a deep and intelligent novel.
Posted by Matthew Celestine at 03:47