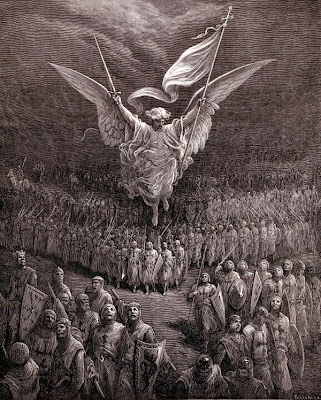 The novelisation of this story, Dr. Who and the Crusaders was in my school library. I really enjoyed reading it at the age of ten, though it was a little more difficult to understand than other Target novels, for instance The Horns of Nimon. As with so many children, a story about knights had instant appeal. The novelisation contained an interesting piece of dialogue, in which the Doctor explained that the TARDIS crew can never change history. Once they land, they are instantly involved in the flow of history. This is how I understand time in Doctor Who. Whatever planet the TARDIS lands on, it's crew don't work against history but perform their allotted role. So when the Doctor goes to Terra Alpha, in The Happiness Patrol, he does not alter history by overthrowing Helen A. The downfall of Helen A was a part of history, the Doctor simply took his place in the tide of history and brought it about. This does not mean that there is no free-will. The Doctor's knowledge of the future is not exhaustive, so he simply does what seems right in the situation, knowing that history will play itself out. That's not how most fans and Doctor Who writers view history in Doctor Who, but I think this makes sense of a lot of stories. As regards The Crusade, if history were not immutable, then the Doctor would surely have been concerned that his involvement in the politics of the court of Richard the Lionheart could alter history. However, he knows that history is immutable and so nothing he does will alter the outcome of history.
Anyway, enough about that. What about the televised serial?
If any story deserved to survive the great wipe-out, The Crusade definitely did. Possibly of all the lost episodes, I think I would most like to see the episodes 2 and 4 of this one rediscovered. The two surviving episodes of this serial reveal just how strong it was, both visually and in the performances. Douglas Camfield is rightly regarded as one of the greatest of Doctor Who directors and in The Crusade he is at his strongest. The Crusade does not attempt to mimic a big movie production, instead what we get is a very theatrical, stagey production that relies on first class acting and exquisite dialogue. It's a very 'talky' story (which is why the audio recordings of the lost episodes work so well without narration), but with such a superb script this works fine. The Crusade tries to hard to be a Shakespeare play and succeeds.
I am a fan who rather likes The Web Planet, yet even I will admit the enormous contrast in quality between this serial and the story prior to it. Perhaps the comparison is not altogether fair. The Crusade was working with familiar historical territory and had access to stock costumes, while The Web Planet required the realisation of an utterly alien world from scratch. Yet one can imagine that Douglas Camfield would have injected some much stronger direction into that serial. The Web Planet suffers not just from the difficulties of realisation, but also from some very clumsy scenes and rather lacklustre performances (though I will always love Roslyn De Winter's plummy voice!).
The Crusade has some remarkably adult features. The regulars are put through some quite terrifying experiences! It's quite disturbing to see Barbara threatened with rape and torture. It must have been quite traumatic for her, having one bloke after another wanting to molest her. It's interesting that younger companions in Doctor Who are never faced with the same level of physical violence that Barbara was so often faced with. One cannot imagine Jo Grant or Zoe ever being threatened with rape. I suppose this is due to those characters being child-identification figures. Maybe the loss of a mature companion, along with the historicals resulted in a certain lack of realism in Doctor Who.
While the villain is an Arab and the Doctor, Ian and Vicky join with the Crusaders, the story avoids taking sides. Richard the Lionheart is not portrayed as a saint and Saladin is given a sympathetic treatment. The Crusades genuinely come across in this serial as the brutal affair that they were.
Together, Julian Glover as Richard and Jean Marsh as Joanna give an absolutely brilliant performance. There is a real subtlety to their work and there is a definite hint of incest in their brother and sister relationship. Odd that Jean Marsh would go on to play Morgaine who also had a dodgy relationship with her brother. The regulars also give some great performances, especially Hartnell, who delivers his delightful lines with such passion. Jacqueline Hill is just so adorable. Perhaps Ian's part in the story is a little dull. Ian does come across here, even more so than other stories, as a bit of a square-jawed hero type.
I have no doubt that if The Crusade were recovered it would go down as one of the greatest of Doctor Who stories.
Posted by Matthew Celestine at 04:30