The Enemy of the World 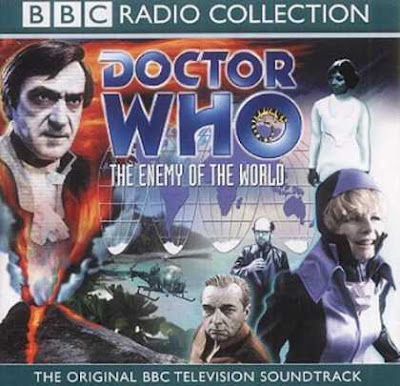 The TARDIS crew sort out Salamander, a 21st century dictator with an uncanny resemblance to the Second Doctor.

Episode 3 is the only one of the six parts that survive. I had to listen to this one on audio. I think it's probably easy to just listen to the audio and let one's imagination work than trying to watch an irritating set of immobile telesnaps. That said, I don't think much of the BBC recordings. Frazer Hines narration is rather uninspiring, being either flatly descriptive or a bit too droll. Perhaps it would be a big departure from the original format, but I can't help thinking that in-character narration might make the recording a little more dynamic. It would also be nice to have a complete recon package. Ideally, the CD would come with the photography and the surviving episodes on DVD.

It has been suggested before that there are remarkable similarities between the Doctor and James Bond. Both are great British cultural exports that began in the Sixties and have lasted for years. Both are radical individualists with a flamboyant dress sense and who make heavy use of gadgets. While the latter may have a more obvious libido than the other, both like to have a lady around with them. The Sixth Doctor shared Bond's habit of making quips at the death of bad guys. The production team have quite clearly looked to James Bond for inspiration. This has been most obvious in the Third Doctor years, with the Doctor working with a security organisation and the Ambassadors of Death being just as much a spy thriller as a science fiction story. Nevertheless, throughout the history of the show you can see James Bond elements. Many of the villains that the Doctor faces could fit into a James Bond film very easily. It is this story, The Enemy of the World, which is the closest that Doctor Who has come to an all-out James Bond-style spy thriller. It's a good thing too. The Enemy of the World is a wonderful demonstration of how flexible the format of Doctor Who can be. It is particularly needed in the Patrick Troughton era, with it's endless base-under-siege plots and in Season 5 with it's relentless monsters.

Season 5 is best known for it's monster stories- Cybermen, Ice Warriors and Yeti. The Enemy of the World is conspicuous for it's lack of an alien monster. Nevertheless, it gives us an incredible human monster in the form of Salamander. He is so ruthless, self-serving and cold-blooded! What is even more scary is the fact that he is hailed by the masses as a saviour of humanity. It is a bleak idea indeed. Troughton's Mexican accent may be a little comical, but he does a superb job of portraying the evil dictator. Kudos to him for taking on two roles and doing a splendid job of both.

The Enemy of the World features such a great cast of supporting characters- the sadistic Benik, the glamorous Astrid, the ultimately cynical and self-serving Kent, the abused Fariah and Griffin, the hilariously grumpy chef.

Jamie and Victoria, being from the historical past both comes across as a little out of their depth in this strange bleak world of the 21st century. However, through boldness and pluck they both manage to prove effective antagonists of Salamander's schemes.

It is easy to complain of these serials being too long, but at six parts it can feel a little tired as a story. It does feel a little awkward that it is Astrid and not the Doctor who frees the underground people at the end, but I suppose the Doctor has always given others the chance to be the hero or heroine.
Posted by Matthew Celestine at 05:25