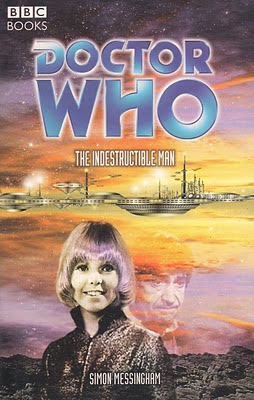 The Indestructible Man is very much a novel that I am in two minds about. Simon Messingham does something very clever and innovative in this book, yet at the same time there are some things about it which I really do not like.

As with Sky Pirates! the cover picture is very misleading. Having read the blurb on the back and seen a smiling Zoe wearing a purple wig, we expect a light-hearted pastiche of Gerry Anderson's various shows. While there is an element of parody in the book, what we actually get is a complete deconstruction of the world in which those shows are set. Instead of being filled with fun and humour, we get one of the bleakest and most depressing novels ever. Messingham turns the world of Gerry Anderson into a dark, violence-filled nightmare. To an extent this is only a step from what we find in the Supermarionation shows. The war of nerves with an unknown enemy in Captain Scarlet is a terrifying premise and for all its goofiness, Stingray is a very militaristic show about a savage undersea war. There is enormous scope for writing dark, adult-orientated fan fiction about the Anderson shows.

Messingham creates a very convincing and detailed world in The Indestructible Man. This world is so brutal and bleak that it makes the future society of Transit seem like quite a nice place. Though I have to admit, with the recent economic problems, the world of Transit actually does not seem that much worse than the real world. For all its miseries it still had stable governments and a welfare state. The Indestructible Man presents a world that has descended into utter chaos.

Although Messingham references a lot of Troughton stories, when it comes to continuity, Messingham is a law unto himself. What we get in this novel simply cannot be harmonised with other Doctor Who novels set in this period. For instance, Messingham has Africa with a decimated population, while Aaronovitch in Transit has rising superpowers in several parts of Africa. The book is also difficult to tie with many televised stories, such as Warriors of the Deep. To cap it all, Messingham puts Wheel in Space in the 22nd century, after this novel. Not only does this ignore the strong arguments that Wheel is set in the 21st century, but it becomes absurd that Zoe has no awareness of any of the events mentioned in the story. This stuff really does bother me. I like to see Doctor Who as a consistent mythos and I don't like authors playing fast and loose with continuity.

It is somewhat frustrating that the book is filled with bitter, cynical characters. Practically every non-regular character is like this. It does remove a lot of colour from the novel. Grant Matthews, who is based on Captain Scarlet seems to be the only character who has any life or holds any interest. Though not a speaking character, Captain Taylor is brilliantly portrayed. A terrible zombie-like figure, he captures the grim demeanour of Captain Black in Anderson's show.

The Myloki are an intelligent creation. Like the Mysterons of Captain Scarlet, we learn little about them. This makes them much more interesting and terrifying than your average alien race. I must admit, throughout the book, I was looking for hints that they might be connected to some other alien race in Doctor Who. It seemed that the Doctor hinted this was the case. I was irritated by the last chapter with its dream sequence. The Virgin novels did dream-like realities to death. It felt rather cliched seeing one here, complete with deceased relatives.

Messingham has a habit of putting his characters through an awful lot of physical and emotional pain. Jamie and Zoe have a really horrible time in this book, undergoing serious psychological trauma. This contrasts massively with the happy-go-lucky child-like pair that we see in Season 6. It's something likely to bother traditionalist fans and possibly even me. I think it's pointless for past Doctor novels to simply recreate an era in print; it's good to do things that could not have been done on television with past TARDIS crews. On the other hand, I don't quite feel able to believe the level of trauma that Messingham inflicts upon Jamie and Zoe. It's a huge leap of credibility to believe that all this happened to the pair somewhere between The Invasion and The Krotons. These are experiences that make or break people. It's impossible to watch Seeds of Death and believe that Jamie and Zoe went through the trauma of The Indestructible Man. On the other hand, Zoe's thoughts about the friendship between herself, Jamie and the Doctor being indestructible is very touching.

I would definitely suggest that readers find a copy of this and have a go. It's a grim and depressing book, but it is quite innovative in its approach, though definitely not without problems.
Posted by Matthew Celestine at 07:48