The Girl Who Waited 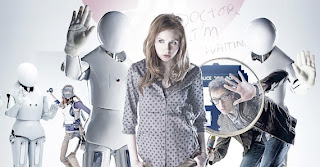 A lot of fan reviewers have made some odd comparisons with this story, referencing Paradise Towers and Happiness Patrol. It seems obvious to me that this episode looks to Warriors' Gate for inspiration. The story involves time jumping, has sinister robots, blank spaces and Gothic gardens and is not a little confusing. Of course, these similarities are purely superficial. The Girl Who Waited is a fundamentally different kind of story to Warriors' Gate. The most obvious difference is the lack of a guest cast. Warrior's Gate was a story about history, empires and slavery. The Girl Who Waited is fundamentally about the regulars and their relationships. To my mind, focusing on the regulars is a bad idea. Personally, I don't find them terribly interesting or enjoyable. Amy has no real personality or believability and is not a particularly nice person either. Rory is easier to like, but he is too wrapped around Amy to be interesting in himself. This particular Doctor has not been developed with any sophistication or care. The Girl Who Waited does not tell us anything new about Amy and Rory; we are just reminded yet again that they really love each other, which we already knew. Rather problematically, neither of them mention their daughter in this episode. These story arcs might be stupid, but using them and forgetting about them for an episode is even worse. Surely Amy's daughter is going to have some relevance to her actions regarding being stuck in the quarantine facility?

While Karen Gillen's performance is impressive in two roles, the older Amy does not convince on a visual level. A woman who has spent the last 36 years struggling to stay alive would be a good deal slimmer than what we see. This detail is especially odd given that she appears to be wearing the same trousers. She also has her hair at the same length and her boots have not worn out despite doing a lot of running and jumping. Her bitter attitude is also odd given that the same thing happened to Rory in The Doctor's Wife and he had previously waited 2000 years for her.

It must be said that this story is the sort of thing that happens nearly all the time in shows like SG-1 and Star Trek: Voyager. The problem with a regular character like Amy becoming old is you know that it won't last beyond the episode. There will always be a reset before the end. Of course, they make it complicated by putting the two Amies together, but we all know the old Amy is a red shirt. Her death is absolutely no surprise. Whatever emotion the episode tries to generate is blocked by our awareness that we have seen this scenario before in American shows where it always gets resolved before the end credits.

It's a bit tiresome to see yet another story about divergent time streams. Given that past Doctor Who stories have avoided temporal complexities, it just seems odd that we are getting so much of this now. The show has never shown a consistent approach to how time works and what we see in this episode sits uncomfortably with the temporal mechanics of other stories. There is a school of thought amonst fans that holds that if time is altered, a parallel universe is created and so if young Amy is freed, old Amy would not cease to exist, but would remain trapped. Evidently the writer does not take this view. My own view is that history is generally immutable in Doctor Who. I am thus very uncomfortable with seeing time re-written as in this episode. If the Doctor can save Amy from being trapped for 36 years, why can't he save Katarina or Adric from death? Using time travel to solve problems just makes everything too easy.

On the positive side, it was nice to see Dr. Who being harsh, ruthless and manipulative, but it is unfortunate that in other stories his  character has been less effectively handled. The Girl Who Waited has received many postive reviews and I think it does come close in places to being a good story, but on the whole it left me unimpressed.

Posted by Matthew Celestine at 07:25