The Council of Nicaea, by Caroline Symcox (Big Finish audio) 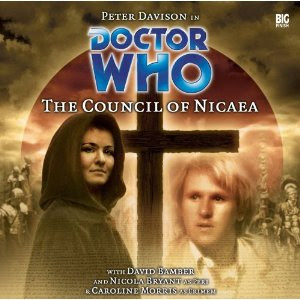 A Doctor Who story about Christian theology!

Caroline Symcox, wife of Paul Cornell did a great job collaborating with her husband on Seasons of Fear. In this audio, she outdoes their joint effort by great lengths. The Council of Nicaea is a beautifully crafted historical drama and one of the finest Big Finish releases.

Mrs. Cornell holds a doctorate in theology and is in Anglican ministry. Proving that it is always a good idea to write about what you know about; she gives us a story about one of the most important moments in the history of Christianity, the Council of Nicaea. For those unfamiliar with church history, it was at the Council of Nicaea that the divinity of our Lord became the official teaching of Christianity and those who rejected it were condemned. Christ was declared to be of 'the same substance as the Father.'

Religion tends to get looked at in a negative light in Doctor Who. High priests and other religious leaders frequently tend to be used as baddies and supporting characters who question religious dogma are often portrayed heroically. The Council of Nicaea departs from this tendency quite radically. Firstly, while the religious conflict is shown to be fearful and menacing, the issues are not dismissed by the Doctor as unimportant. The Doctor says that he 'keeps an open mind' on the question of the divinity of Christ. It is almost as though the Doctor allows the possibility of Christianity and the divinity of Christ to be true. The whole subject of Christian belief is treated as something worthy of respect. Secondly, for once we find out the religious background of a companion. Peri turns out to have been raised a Baptist and refers to her pastor back home (though I despair at the thought that somebody raised as a Baptist would be unaware of the Nicene Creed and the importance of the divinity of Christ!). Religion is seen as something that plays a meaningful part in peoples' lives. We have moved a long way from The Face of Evil and St. Anthony's Fire. That said, I am uncomfortable with the portrayal of Athanasius as the bad guy and all the sympathy being given to the heretic Arius. As an orthodox Protestant, I regard Athanasius as one of the great heroes of the Christian faith who defended and established the doctrine of the Trinity. I suspect that Caroline Symcox is a little more liberal in her theology than I am.

The Council of Nicaea is very thankfully a pure historical. No alien monsters or interfering time travellers this time. The new series has shown the limitations of the pseudo-historical genre. I think a lot of fans would agree with me that the demise of pure historicals in the Sixties was a great loss for the show. While I hold a doctorate in theology, like the writer, I am sure a lot of listeners came to this story with very little knowledge of the Council of Nicaea or Constantine. Pure historicals have a wonderful potential to educate.

This audio takes us back to that thorny old question of 'Can you change history?' that was first explored in The Aztecs, all those years ago. Once again, the answer is 'oh no you can't.' It's good to be reminded of this. While I adore the timeline-hopping Klein trilogy, I think Big Finish have gone rather to far with stories about alternate timelines. Colditz makes it look as though you can alter history just by getting out of the TARDIS, a notion that would shake apart many past Doctor Who serials. I am much more comfortable with the Sixties Doctor Who premise that history is immutable. In this story, Erimem makes the old mistake of Barbara in thinking that she can rewrite history to a fashion that suits her taste. Like her she fails spectacularly.

The Council of Nicaea does a great job of portraying a society in which every citizen is caught up in theological disputes and riots occur over such matters. Symcox avoids it all getting dry by showing it's relation to the Machiavellian politics of the Roman court. This is helped by some strong guest performances. David Bamber is wonderful as the Emperor Constantine. I love the way his character is explored, with Erimem condemning him as a tyrant and the Doctor defending the integrity of his character. Constantine is very much shown to be a 'grey' character, a man who must be harsh, but not necessarily for the wrong reasons. Claire Carroll is also great as the camp and bitchy Fausta. The scene where she gets Peri drunk is delightful. We could perhaps have done with a little more exploration of her character.

I am convinced that the Fifth Doctor, Peri and Erimem are the best TARDIS crew in Big Finish and arguably the best TARDIS crew since Season 1. Peri and Erimem have such a beautifully strong bond that it's fracturing in this story works incredibly well dramatically. Nicola Bryant powerfully portrays a young woman torn between what she knows is right and the emotional appeal of her best friend. Caroline Morris is so powerful in the role of a passionate and idealistic girl. This is perhaps her strongest performance in the role of Erimem. I have some doubts whether this character would identify Constantine as a tyrant (would that concept be all that meaningful to a Pharaoh of Egypt?) and I might expect her to be more sympathetic to the need to exercise restraint over religious divisions, but it still comes across well dramatically. Peter Davison does not disappoint at all as the Doctor. He seems so much stronger when placed in an historical story than he does when on alien planets or Blakes-7 space stories.

The Council of Nicaea is in my judgement one of the finest Big Finish stories and I especially recommend it to Doctor Who fans who are Christians.

Posted by Matthew Celestine at 05:06