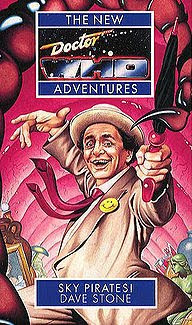 Leaving aside the Seventh Doctor's apparent resemblance to Ken Dodd, the cover of Sky Pirates! is very misleading, as is the blurb on the back. Sky Pirates! holds out the promise of a light-hearted and funny adventure about pirates. While the book is filled with humour, it is actually a really dark, bleak book about genocide, with very creepy pirates, hideous monsters and some of the most graphic violence and gore in Doctor Who.

The influence of Terry Pratchett on Dave Stone's writing style is very apparent. There is a clear difference in tone, however. Pratchett's novels contain a lot of cynicism, but they still have a warm, gentle fondness for humanity. Sky Pirates! takes a much bleaker view of life, with much less likable characters, even if it does highlight how people in the most miserable situations thrive on hope. A definite similarity to Pratchett is the way everything becomes a bit chaotic and confusing somewhere after the halfway point; the difference being that Stone's novel is pretty confusing throughout. The style is very verbose and the dry humour can sometimes get in the way of understanding what is going on. Some of the endless footnotes become irritating and the silly appendices are pointless. Nevertheless, it does generate plenty of laughs here and there. It is one of the longest of the Virgin New Adventures. I think it could definitely have done with being edited down to size a bit.

The monstrous Sloathes are one of the novels' highlights. These monsters could comes across as rather generic shape-shifting slimeballs if written by anybody else, but Stone gives them a very colourful character. As a story about a parallel universe, Sky Pirates! is highly effective. It creates a vivid, but bizarre world long before you realise that it is not the normal universe. There is a real sense of location and history about the places and peoples in this novel. Dave Stone definitely shares Lawrence Miles' talent for world-building.

Chris and Roz had only just be introduced in the previous book, Original Sin. The author does a great job of helping the reader to get to know these characters better. Benny also does well out of this book, her relationship with the Doctor having matured considerably at this point. As regards the Doctor, Dave Stone provides the most shocking portrayal of the Doctor since Cat's Cradle: Warhead. If you hate the idea of the Doctor being a god-like figure, then you will hate this novel! Not only does the Doctor manipulate nearly everything that happens in the book, but he produces all kinds of objects from nowhere and his clothes in a pristine condition throughout. At the climax, he grows in size and becomes his other other self, a sort of cosmic being.

I found Sky Pirates! quite a difficult novel, but I certainly did find it enjoyable in places.
Posted by Matthew Celestine at 05:58