Terror of the Autons 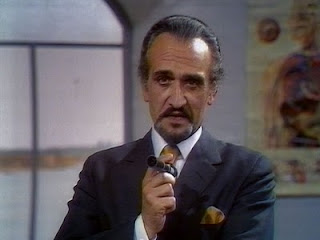 "I refuse to be worried by a renegade like the Master. He's an unimaginative plodder."

It is unfortunate that script editors in various eras of the show did not share the opinion expressed above. If they had, we would have been spared endless tedious stories about the Master coming up with yet more ludicrous and uninteresting schemes. As I have said before, giving the Doctor an evil opposite number was an all-round bad idea. It made for lazy script writing, it gave us really uninteresting stories like Time Flight and it removed any ambiguity from the Doctor's character by making him into the knight in shining armour.

While the Master is deeply enjoyable in Terror of the Autons, the problem with this character is apparent. He lacks any convincing motivation for his actions and his scheme seems half-thought out. The Doctor points out the flaw in his scheme at the end and he immediately changes sides. A lot more of this sort of thing was on its way.

This story marks big changes to the UNIT format- the change of the uniforms, the introduction of the hopelessly drippy Captain Yates and the transition of the Brigadier to comic opera buffoon. These changes were very much for the worse. The harsh and bleak realist vibe of Season Seven was squeezed out in favour of a much lighter tone, but without any reduction in the horribly high body counts. It began to look like Dad's Army, except with people actually getting killed.

The departure of Liz Shaw and her replacement by Jo Grant was also one of the changes introduced in this story. Liz Shaw was never well developed as a character and the miniskirts she was dressed in did not serve her well, nevertheless her departure is saddening. I am one of those that despise Jo Grant;s character. The way she comes across as so child-like is incredibly annoying.

The Third Doctor was arrogant in Season 7, but in this story he becomes particularly obnoxious. Particularly, as he is given a stupid young woman that he can constantly patronise. It also turns out that the Doctor is a patrician who attends private clubs with government ministers. I'm a Tory myself, but I don't particularly care for the Doctor being an establishment figure, regardless of my own politics. It has been suggested that Holmes did not really intend this to be the case; the Doctor was supposed to be making up that nonsense about knowing the minister, but Pertwee misunderstood this and played it as sincere.

Terror of the Autons is not blessed with a strong plot. It feels like a move from one set piece to another. The way it delights in one clever form of killing after another feels gimmicky. It is unfortunate that the creators of the BBC Wales series felt this was the way to do Doctor Who, hence such absurdities as robot Santas and Sat-Navs that kill people. It has been argued that there is a form of satire going on in Terror of the Autons, with the tastelessness of plastic consumer products being shown up. This would be rather more meaningful if it were people that bought plastic products being killed by them, but the plastic chair kills a man who thinks it looks tacky and the troll doll kills a man who thinks it looks hideous.

I'm not sure the Nestenes needed a return after Spearhead from Space. As I argued with regard to that story, the Nestenes don't quite feel believable. Everything about them seems tailored for invading Twentieth Century Britain. It is impossible to imagine the Nestenes having an existence independently of a UNIT story. They are a plot device for writing gimmicky stories.

On the positive side, Michael Wisher gives an impressive performance as the young factory director. His relationship with the charismatic Master is very well accomplished.

A lot of fans regard Terror of the Autons very highly, but I'm afraid it's really not my cup of tea.
Posted by Matthew Celestine at 03:49