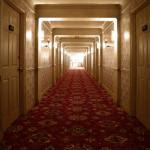 Another rubbish episode, another wave of positive reviews. Why do people like these awful stories so much?

A story about fears coming to life in a surreal nightmarish setting comes across as a bit rich so soon after Night Terrrors. I suppose these kind of stories are much cheaper to make than stories about alien worlds and space ships. The big problem with these kind of surrealistic,'virtual reality' stories is that you can't really believe in them. The terrifying things in the rooms have no capacity to terrify because you know they are not real. The God Complex tries really hard to be scary by throwing in as many stock scary images as possible, but we know what they are trying to do, so it doesen't work. It's all too knowing and all the humour that is thrown in runs counter to it. I pretty much said the same thing about Night Terrors.

The God Complex features some of the worst acting we have seen in the current series. The guest performances are just so dismal. It's a good job that Rita was not intended as a new companion. She would have been even more unbearable than Amy.

This episode takes influences from many past stories- Paradise Towers (the last Yellow Kang dying at the beginning), The Mind Robber, The Horns of Nimon and The Curse of Fenric. The last one is most significant because of the contrast between the two attempts at causing a companion to lose her faith. When the Seventh Doctor sneered at Ace's faults, we really did feel for a moment that he really meant it. It was cold and brutal. It felt right. I fail to see anything in what the Eleventh Doctor said to Amy that would cause her to lose her faith in him. With that awful Murray-Gold music in the background, he might as well have been saying "I'm the Doctor, believe in me!"

I hate comedy aliens. If you are going to create an alien race, why not create one which is believable and which is treated seriously? It's so annoying when an alien wear's contemporary western clothes and talks like somebody from modern Britain. As for his people's chances of survival, Daleks, Cybermen, Nimon and Dominators don't seem terribly merciful to the races they conquer, do they?

I did like the monster. It captured the bestiality of the Destroyer in Battlefield. Finding out that it was a distant cousin of the Nimon was cool. That rather torpedos the theory that the Nimon's immobile heads were helmets or masks. The idea that the creature wanted to die was a bit banal, however.

It was great to see the departure of Amy. Good riddance. though we can be sure that she will be back. Yet again, Amy and Rory don't seem terribly bothered about finding their daughter. I suppose the story arc is so bizarre that nobody really knows how to make it work.

I really don't get what people like so much about this episode. As for all the discussion about what was in the Doctor's room, has nobody watched The Mind of Evil? Don't they know the Doctor is terrified of Koquillion?
Posted by Matthew Celestine at 06:39