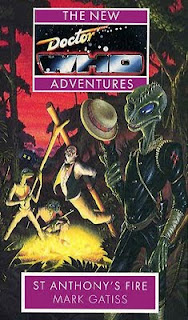 Mark Gatiss is really not a good writer at all. He seems to either come up with unimaginatively traditional Doctor Who stories like Nightshade or else 'everything but the bathroom sink' jumbles like Victory of the Daleks. St. Anthony's Fire, is very much in the former, like his previous New Adventure.

The biggest problem with St. Anthony's Fire, apart from the very standard Whoish plot, is the all-out assault on religion. This novel seems to suggest that everybody who has faith is a deluded fool and all religion causes terrible atrocities. The Betrushian religion is built on a misunderstanding about an alien race's activity and leads to genocide. The Chapter of St. Anthony's Fire kidnap people, brainwash them, force them to endure terrible suffering for no reason and commit genocide. There is not the slightest suggestion in the book that some religions might 1) be true, 2) be believed by intelligent people, 3) not commit terrible atrocities, 4) Do acts of kindness and benevolence. Obviously, there are lots of oppressive religious groups in the world, but the kind of one-sided attack on religion in this novel is clumsy and unpleasant.

Even as a critique of religion, St. Anthony's Fire fails because it does not portray any appealing side to religion. An intelligent critique of religious belief and activity has to address the fact that religion does appeal to people. The Chapter of St. Anthony (how they came to centre their religion on a minor saint makes no real sense) are so horrible and brutal that nobody would ever want to join them. Hence, they have to brainwash their converts. Yong, the Chapter's leader is a cartoonish character who tortures kittens. He is a sort of religious version of Fu Manchu.

Gatiss is okay at writing for the Seventh Doctor, Bernice and Ace. The problem is that he does not do anything interesting with the regulars. Ace only joins the Chapter because she has been brainwashed, so nothing much new is revealed about her through it. We get an old-fashioned companions separated from each other and the Doctor routine, just like the old days. The resolution of the book is uninteresting too. We get a very Star Trekkish technobabble-based solution to the problem.

Just wait until Mark Gatiss becomes the next producer of Doctor Who.
Posted by Matthew Celestine at 22:24