Yet another story built on the premise that a Yeti in a loo is a good idea. Unfortunately, it's a terrible idea. A Yeti in a loo is not scary; it just looks stupid. Likewise Cybermen in a department store look even more stupid. One of the consistent failings of this season has been the inability to recognise that if you want things to come across as scary and menacing, you have to tone down the comedy.

James Corden also makes a return appearance. He is dreadfully annoying. A lot of reviewers point out the fact he has a lot of chemistry with Matt Smith. I don't care. He's not the sort of character I want Dr. Who to have chemistry with.

Moffat seems to be a bit obsessed with fatherhood. We get another story sentimentalizing fatherhood and its trials. It is starting to get a bit annoying. We don't have any exploration of motherhood to counter-balance it all; Amy's concern about her daughter is always fleeting and seems to be a bit half-hearted. Themes of fatherhood tend to point in a conservative direction and one can see a decidedly middle-class flavour to the Moffat producership. Doctor Who these days is no longer about people who are outsiders and on the fringes of society, like Ace and Dodo, but about middle-class people. Notice the Doctor's comments to baby Alfie about human life; he talks about mortgage payments and working 9-5. Middle class existence is now the default position for human life in Doctor Who. People who can't get mortgages are outside of the scope of the current series. At times it seems as though Moffat and Co. are singing from the same hymn sheet as David Cameron. I'm an active Conservative party member who believes our prime minister is a decent chap, but I'm not sure I like Doctor Who preaching the message of 'Broken Britain' and the 'Big Society.' 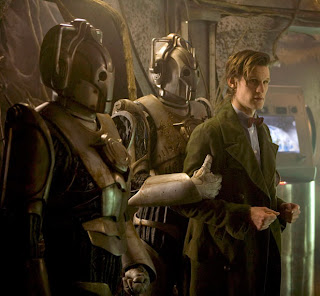 Having seen the departure of Amy and Rory last week, it was very irritating to see them making a cameo in the very next episode. It turns out that Amy has now found fame and fortune in the gold-paved capitalist wonderland that this show now celebrates. This is the same Amy who grew up without parents, was receiving psychiatric treatment and doing a job that would put her ouside of respectable society. The show seems to be out of touch with the realities faced by people outside of a comfortable middle-class existence.

The ending with Mrs Kovarian, the Eyepatch Lady is dreadful. I love camp, bitchy female villains, but this was the stuff of childrens' cartoons. There was also a clear lack of narrative development. There is no sense that the events relating to River Song are moving of themselves, but are being put into place according to script. We are practically being told "now this bit happens next."

It's nice to see Lynda Baron being used again, but it's a shame it is in such a terrible story. It is remarkable to see how much continuity has been brought up in this half of the series. Right at the beginning, we get the Smith referencing Troughton in The Five Doctors and later Tom Baker in Revenge of the Cybermen. This is only a week after we had a reference to the Nimon. As we know from many 80s stories, lots of continuity references do not make a bad story good.


Posted by Matthew Celestine at 08:11