Animated recon courtesy of DrWhoAnimator.
It would not be unfair to call The Savages a rather obscure story. No episodes exist in the archive and unlike some missing stories, such as Marco Polo or The Massacre, it has no great reputation. Perhaps its lack of a monster has caused it to drop from the collective memory of fandom. Its main significance is seen to lie in the departure of Steven.
Doctor Who began in An Unearthly Child with a story about cavemen. Here we get another First Doctor story featuring cave people, yet the change in the Doctor's attitude and values is enormous. Back in his first adventure, he showed complete contempt for the lives of the primitive humans he encountered. Here he values the savage humans as equals and is outraged by the injustices perpetrated against them. It is great to listen to the Doctor's condemnation of Jano's regime. 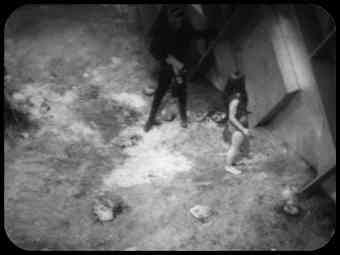 This is the First Doctor's third visit to the very far future, the others being The Web Planet (humanity has made its presence known in another galaxy) and The Ark. The Hartnell era seems particularly suited to dealing with the very far future, as it gave these stories a somewhat ethereal, dreamy atmosphere. We are no longer in the era of spaceships and robots, but an era in which humanity is living on an altogether, higher almost mythic plane of existence.
Delightfully, this is a story in which nobody dies. Sadly, there are altogether too many Doctor Who stories with high body counts. There is something ugly about the way writers would inject large numbers of onscreen deaths into stories. Despite the sadness of Steven's departure, the ending of The Savages is very upbeat and positive. There is the promise of peace and new hopes. Like The Ark, two groups previously hostile are forced to come together and live with each other. other. It is remarkable how little we see of this in later stories. In future, the villains would tend to die grisly deaths and the monsters would all be blown up. This Doctor is not fighting against terrible things that have bred in dark corners, but is knocking together the heads of warring parties and teaching them a better way.
For the first time, we see the Doctor acquiring a reputation outside of his own people. The inhabitants of the city know of the Doctor's travels, though not his name. This is quite interesting in terms of background. The Elders seem unaware that the Doctor would be against their activities, so it suggests that the Doctor had been travelling in this time before he was joined by Susan, before he called himself the Doctor and before his attitude mellowed in Season 1. Contrary to this notion, we are told in Carnival of Monsters that the Doctor had campaigned against miniscopes before his travels, a fact that sits awkwardly with the coolness of the Doctor in Season 1. I like to imagine that the youthful Doctor went on his crusade against miniscopes to impress a girl.
One thing that makes little sense is the lack of concern by the Elders about the welfare of the Savages. I know that the Elders think the Savages are subhuman scum, but they do depend on them to propel their civilization. Given the way the Savages are treated, their is the possibility that these people could end up dying out in the wilderness. I would have expected the Elders to show more concern about maintaining their feeding stock. 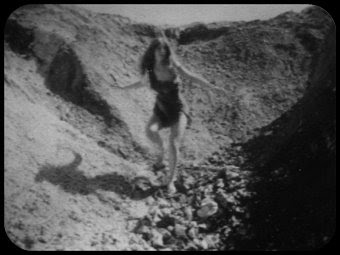 As with An Unearthly Child, we get a cave girl skipping about in her bare feet. As I have suggested before, it would have been more realistic for Leela to have gone barefoot. Even in the Middle Ages, Leela's boots would have stood out as exceptionally well made.
It's hard to judge the quality of The Savages by what is left of it, but I would have been happier had Doctor Who writers had stuck more closely to the values and spirit of this story. You don't need a scary monster to make a beautiful science fantasy story.
Posted by Matthew Celestine at 07:27