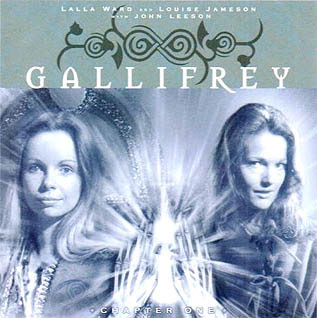 In his infamous 2002 interview, Lawrence Miles said of Big Finish:
"SOME HAVE SEEN THE NEW RANGE OF BIG FINISH AUDIOS AS THE RETURN OF REAL DOCTOR WHO". Yeah, sure. Never mind the fact that some of us have been doing everything we can to build up a next generation fanbase. Just get a couple of has-been character actors to do the voices, and suddenly that's real. For f**k's sake... When Doctor Who finally dies... and it will die, because now the newcomers are going to start turning away again, and you're going to be left with this dwindling audience of fifty-year-olds who just buy the CDs because they've got Peter Davison's picture on the front...
For all the harshness of this comment, it does hit a certain truth. I'll admit I am a sucker who bought the first season of the Gallifrey spin-off just because it had Louise Jameson and Lalla Ward in it, not to mention Lynda Bellingham. The folks that created Big Finish are smart people; they realise how much we fans love these 'has-been character actors' and they are making capital of this pool of human resources. Just yesterday I went into ecstasy with excitement on hearing about the forthcoming Big Finish spin-off, Counter-Measures. Just the thought of hearing Pamela Salem reprising her role as the delightful Rachel Jensen made me giddy. It is incredible that there are people like me who will shell out fifty quid just to hear a bunch of obscure actors reprising roles from just one story broadcast over twenty years ago.
So it's got Louise Jameson and Lalla Ward in it, but is it actually any good?
A series about Time Lords on Gallifrey is an obvious option for a Doctor Who spin-off series, but that does not mean it is a good idea. In 2004, Doctor Who writers really ought to have learned to move past this sort of thing. Stories like Invasion of Time (as story for which I have a degree of fondness) and Arc of Infinity killed the Time Lords. The idea of the Time Lords as gods of history is a fascinating one, but it is an idea that cannot easily be presented on television. Hence stories about the Time Lords ended up being about a rather mundane society of bureaucrats and technologically advanced Oxford dons. The BBC books and our beloved Lawrence Miles helped to correct this and restored a sense of awe and wonder to the Time Lords. The writers of the Gallifrey series have not learned from this development in the slightest and what we get in Weapon of Choice is a political thriller set in a technologically advanced society. Potentially entertaining, but yet another nail in the coffin of the idea of the Time Lords as an ethereal race of beings who uphold the universe.
The intrigue of Weapon of Choice revolves around a weapon called a Timonic Fusion Device. It's basically just a big bomb that blows up time, barely a step away from the Daleks' 'Time Destructor.' The Book of the War in the Faction Paradox range revealed all kinds of surreal conceptual weapons used by the Time Lords, sorry Great Houses, and their opponents. The Timonic Fusion Device just feels like any old Doctor Who McGuffin.
The plot of Weapon of Choice is quite complex. I listened to Weapon of Choice late in the evening before going to bed. This did not help me to make sense of the complex plot, but I found it extraordinarily relaxing to have it on and just let the atmosphere wash over me. I listened to the rest of the Gallifrey Season 1 this way. These audios are absolutely great for nodding off to.
One obvious question is how old Leela is at this time. Taking into account other aspects of Doctor Who continuity, considerable time must have passed between Invasion of Time and Romana's presidency. Is she being kept alive artificially using Time Lord technology? This question becomes even more pressing in the next story when Leela becomes an exotic dancer!
For all the deficiencies of this story, the cast are absolutely great and make it worth listening to. I had not heard Irving Braxiatel in the Bernice Summerfield audios, but he certainly is great here, mysterious, a bit self-serving and manipulative but quite decent at heart(s).
Weapon of Choice has contemporary relevance in its concern for issues of refugees and asylum seekers. The Enclave of Gryben captures the misery of places inhabited by people stuck in transition. I also love the Gallifrey theme tune. This story may have similarities to American science fiction shows like Star Trek, but the cool, industrial-sounding theme tune indicates that we are in a different league.
If you want something relaxing to listen to before you go to sleep, Weapon of Choice and the rest of the first season of Gallifrey is worth buying.
Posted by Matthew Celestine at 04:07