The Wedding of River Song 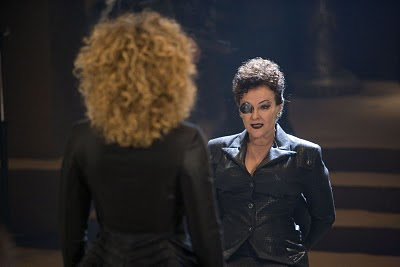 The First Doctor: You can't change history, my dear.
Barbara: Why not?
The First Doctor: Because this is a fixed point. If you change this, the entire universe will descend into chaos, with Romans frolicking with Pteradons and that irritating twit Churchill running everything.
Barbara: How can you know that?
The First Doctor: Because I'm the Doctor and I know everything. Do you need to ask?
(Taken from the unmade story "The Incas," written by Charles Dickens)
I was expecting this episode to be absolute garbage. It was, but my big surprise was how few surprises were thrown in and how predictable the whole thing was. It had all the banal trappings of a Moffat season finale, a roller-coaster ride of action, special effects wizardry, alternate timeline nonsense, an old monster thrown in for good measure and lots of references to previous Moffat stories to remind everyone that the man thinks he's George Lucas. More than this, the key puzzle elements that everyone was wrapped up in turned out to be rather obvious. It was a Teselecta robot that got killed. It was either going to be that or a Ganger. No surprise there. Even if you haven't watched the episode you don't need me to tell you what the big question was.
As for the big bad villainness, Lady Kovarian with the eyepatch, we still have no motivation or explanation about who she is or what she was up to. She is rather easily disposed of. Admittedly, this happens in an erased timeline, so perhaps we will see her again. I'm a little in two minds about Amy killing Kovarian in cold blood. It is frustrating when characters find it impossible to kill the villain, when in real life the truth is that people find it all too easy to kill in the heat of the moment. I have no problem with the Fourth Doctor blowing up the Graf Vynda-K or killing Solon with poison gas when necessity demanded it. It made a nice contrast with other heroes who would endanger everybody by refusing to kill at a crucial moment. But seeing Amy kill Kovarian when she was helpless was a bit nasty. Maybe I feel strongly because Kovarian is a woman. I am always disturbed by violence against women. At least she felt remorse over it later.
This whole thing about a fixed point in time is just silly. Why is one point in time fixed but not another? Given all the alterations to the timeline we have seen since decided to abandon the Hartnell era notion that history is fixed, it is odd that one small moment of the Doctor getting killed should throw all reality into chaos. It's like the whole universe revolves around the Doctor. As for a world in which all history happens at the same time, this is an impossible and absurd notion that has been used simply to justify impressive but ultimately unimaginative visuals. I'm really tired of these supercosmic stories in which the entire universe is re-booted. Having the entire universe destroyed and then re-created in The Big Bang was bad enough. The destruction of the universe has now become a rather banal concept.
What has happened to Alex Kingston's acting? Her performances were one of the few strong points of this series, but in this finale her performance was really lacklustre and unconvincing. I did predict that River Song would be killed off a while ago. I was wrong. I'm sure we will see some more of her. Perhaps the writers will get the chance to give her a personality, but I won't get my hopes up.
A lot of reviewers have heaped praise on the reference to the death of Brigadier Lethbridge-Stewart, describing it as a 'beautiful tribute' to Nicholas Courtney. I thought it was painfully sentimental. Nicholas Courtney was a great actor and all of us fans have mourned his passing. However, a throwaway piece of dialogue to justify a stupid plot manoeuvre does not make for a fitting tribute. Besides the Doctor has lived for centuries. As alien as it may be for us, the death of one human being, no matter how close to him is probably not going to affect him so strongly. He may well have had news of the death of other people close to him such as Jo Grant, Dodo or Ben and Polly, or he at least knows they will die.
As for the question of who the Doctor is, just re-watch Silver Nemesis. Lady Peinforte made a big deal out of what an astounding secret the Doctor's name was, but was the Doctor bothered?
The Wedding of River Song is a predictably bad conclusion to really awful season. Who knows what will come next.
Posted by Matthew Celestine at 07:55