Faction Paradox: Of the City of the Saved..., by Philip Purser-Hallard 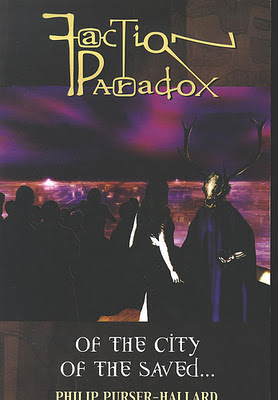 The City of the Saved is a vast city the size of a spiral galaxy. It exists in a pocket universe situated after the destruction of this universe. Its vast population is made up of the resurrected bodies of every human being that has ever lived. Obviously, this is massive high concept science fiction.
A lot of fans who read Faction Paradox: The Book of the War hated the idea of the City of the Saved, as it smacked of a religious notion of an afterlife. This is actually deceptive. As somebody points out in an introductory chapter to Of the City of the Saved..., the word 'saved' can have the meaning of data being restored onto a computer. It is a delicious play on words. Their is an ambiguity as to whether the resurrected humans are the genuine persons they pertain to be or manufactured facsimiles.
I am an evangelical Christian who believes in the resurrection of believers to eternal life and the unbelieving to eternal destruction, so naturally a novel about life after a sort of secular resurrection was of great interest to me. I have heard preachers say that if God were to let sinners into heaven, they would spoil the place. Reading Of the City of the Saved... certainly confirmed this idea in my mind. The City of the Saved might be inhabited by immortal resurrected humans, but it is certainly not the heavenly New Jerusalem. On the contrary, it is a hive of scum and villainy. The resurrected humans have brought with them every shade of depravity and nastiness of this life with them. The City of the Saved is a dystopia, with poverty, organised crime, prostitution, drug addiction and every thing else that makes life miserable, with the only difference being the inability of the city's inhabitants to harm or kill each other.
Having enjoyed This Town will Never Let Us Go enormously, I found myself wishing that Of the City of the Saved... was a Lawrence Miles book. Purser-Hallard does not quite have Miles' talent for entertaining high concept madness. I found it a little dense and a bit too violent for my taste in places. Compassion did not come across as that interesting a character, being another one of those moody, 'don't mess with me on a bad day' detective types. As with the 8th Doctor books, Compassion never quite lives up to her potential. At least in the 8th Doctor books, her abrasiveness was contrasted with the mild-mannered Doctor and the easy going Fitz. Without them she seems just a little uninteresting.
Nevertheless, this novel is not without some nice touches. Purser-Hallard's complex prose does a wonderful job of juxtaposing a surreal, dream-like atmosphere with the harshness and gritty realism of an urban environment. Of the City of the Saved... is an incredible experiment in world-building and the writer definitely manages to pull it off. The author wisely avoids the cliche of populating his afterlife with famous historical figures. Instead we get a cast that is far more varied. We are given the impression that the majority of the inhabitants of the city are quite different people to you and I. This is a humanity that has diverged in countless different evolutionary directions. If humanity is to last for millions of years into the future, as is clear in the Doctor Who universe, we can expect those from distant eons into the future to outnumber those from the past.
I was a little disappointed by the explanation for the city's origins when it was revealed towards the end. Without giving it away, it is not that different to some things we have seen in the Virgin New Adventure books. It came across as just a little unoriginal. The talking statue was cool, however.
A Time Lord, sorry Houseworlder, appears in this novel. One of the great ideas of Lawrence Miles was to inject mystery into the Time Lords by keeping them at a distance. That worked so well that when we get a Time Lord in this book, there is a real sense of a nature that is alien and remote from humanity. We are far away from Invasion of Time/ Arc of Infinity territory. There are other references to Doctor Who in this book, the half-Androgum character is an especially nice touch.
Of the City of the Saved... is not the easiest of books to read and is a little grim in parts, but is not without some great ideas.
Posted by Matthew Celestine at 03:16