This Town Will Never Let Us Go, by Lawrence Miles (Faction Paradox) 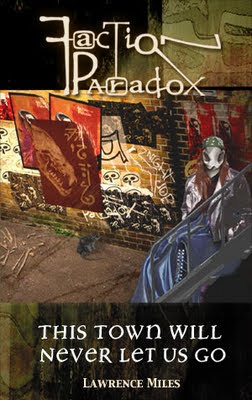 Five minutes ago, or maybe fifteen, she was squinting at the screen and trying to work out who the celebrity guest is on this particular show. The token sacrificial human, an old, sad, beaten-looking man, evidently trying to enjoy his time with these colourful puppet-breeds but realising they represent a world he no longer understands. Kermit the Frog described it as a 'great honour' to have him in the studio. Inangela finally identified him- shakily, it's got to be said- as George Orwell. She vaguely recalls that when she first walked into the stopover, the Muppets were in the middle of a comedy re-enactment of the 101 scene from 1984, starring Rizzo the Rat. Or at least she thinks she remembers that, but she could be retro-imagining it.

On the very first page of this novel we get the most surreal idea imaginable; George Orwell apparently appearing as a celebrity guest on The Muppet Show. Only a mind like that of Lawrence Miles could have come up with something like this. It's such a gloriously colourful and bizarre notion that it just sucks you in and draws you into the rest of the novel.

Like every other Lawrence Miles novel, This Town will Never Let us Go is not blessed with a strong plot and things start to get a bit frantic towards the end as the author tries to bring the book to some sort of resolution. I suspect most people who have heard of this novel know who Lawrence Miles is and will not be reading it in the hope of reading a tightly-written , gripping adventure. That's just not the sort of book that he writes. If you don't care for Lawrence Miles' blend of surrealistic madness and intellectual analysis of everything, you may as well not bother reading this.

The most distinctive literary feature of This Town Will Never Let Us Go is the highly involved narration. The book is narrated almost conversationally, as though Lawrence Miles were sitting with you, telling you the story, along with his opinions on modern life. Miles is almost become the central character in his own novel. It is a feature which risks alienating the reader, as it is fair to say that Miles uses the novel as a platform to preach his particular take on society. Being a pro-free market conservative who supported the War on Terror, I inevitably find myself disagreeing with Miles most of the time, but I still find his views very interesting.

While This Town Will Never Let Us Go is the first novel in the Faction Paradox series, it is not really about Faction Paradox. The Faction are more of a background presence. This novel differs from other Miles books in the scale on which it operates. While his other novels deal with grand, sweeping cosmic events, this book is all about ordinary characters and how they are affected by the unseen cosmic War.

Bizarrely, Lawrence Miles continues the original educational agenda of early Doctor Who. The first companions of the Doctor were a science teacher to teach young viewers about science and a history teacher to teach them about history. Lawrence Miles' books are rather thin on school teachers, but in his inimitable way, he educates fans about postmodernity, poststructuralist literary theory and cultural anthropology. This Town Will Never Let Us Go has the influence of the French postmodern philosopher Baudrillard written all over it. Baudrillard's theory of hyperreality is explored in depth and with it the notion that events like wars have a more substantial media existence than they do an actual spatio-temporal reality. Lawrence Miles also brings up some interesting anthropological ideas about the place of rituals and symbols and how magic has an important place even in modern society.

The novel is set in a world that looks very much like ours, but is not quite the same. The town in which the story unfolds is never named. At first I wondered if the setting was meant to be Italy, but then it became apparent that this place was meant to resemble 21st century Britain. The most obvious difference from our world is that it is being affected by the mysterious War. This seems to be the same war explored and detailed in The Book of the War. This War is very obviously analogous to the War on Terror. In a postmodern spirit, it is not at all clear whether the events of the book are meant to be taken literally on their own narrative terms or whether they are intended to be treated purely on a metaphorical level. Given the highly didactic nature of the book, the latter seems rather more likely. The appearance of a literal 'Dog of War' is a nice play on metaphors.

The characters are an odd bunch. We have the ritual-obsessed Goth, Inangela. It's hard to really get a feel on her character. She comes across as very confident and having mysterious depths. Her friend Horror is very shallow best-friend type, who turns about to be rather more important to the plot than might be expected. Many reviewers have suggested that these characters have a very Buffy flavour. I found myself taking a massive dislike to Valentine, an ambulance driver who is also a fanatical revolutionary type. He shows a callous disregard to human life. As somebody who works in an accident and emergency department, I was unconvinced by the realism of his activity. There is absolutely no way an ambulance could go off on excursions with a dying girl in the back. Ambulance crews are just too closely monitored for that to happen.

The most engaging character was Tiffany Korta, one of those manufactured pop stars. It's remarkably disconcerting to see her discovery of the way her media image is being manipulating. One of the most terrifying scenes is when she is put on 'trial' by her record company executives who seem to almost wield absolute power over her very existence.

As in Alien Bodies, we get a character called the 'Black Man.' He appears remarkably similar to the one we met in that novel. He gets a very powerful and quite scary scene with Valentine. The comparison between the Black Man and the strange media witch, Miss Ruth is interesting.

I found This Town Will Never Let Us Go an immensely interesting and enjoyable read, but then I am a massive Lawrence Miles fan. It is certainly not his best novel and I suspect those who dislike his work will not be impressed.

Posted by Matthew Celestine at 04:08