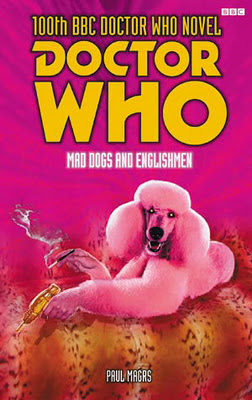 Mad Dogs and Englishmen is not just a funny novel, it is laugh-out loud funny. I don't think any Doctor Who novel has made me laugh as much as this one.

This novel is mostly about poking fun at popular science fiction and fantasy. There is a character who is clearly based on J.R. Tolkien, a humourless academic who has written a vast epic about elves and goblins. The central premise of the plot is that the timeline has been altered so that the epic is now about talking poodles (who are in fact real). We also get a good deal of Star Wars parody. There is an hilarious moment when the poodle princess sends a message proclaiming "you are my only hope." George Lucas also has his stand-in as a film director who loves playing with toys and who regards all the boys and girls who watch his films as his friends. He earns the enmity of a character who stands in for Ray Harryhausen by replacing the animatronic effects in his films with CGI. Yet we also have a character from the real world; Noel Coward, who has been obtained the power to travel in time with a pair of magic pinking shears.

Mad Dogs and Englishmen is wonderfully written; it so light and easy to read. The plot is remarkably complex and does not make a lot of sense, but I didn't find myself caring. This book is gloriously bonkers and revels in its own silliness.

We get a return appearance from Iris Wildthyme, who is never actually named. This time she is in an incarnation that is clearly modeled on Shirley Bassey. Perhaps her appearance in this story is a surprise given that the previous novel, Adventuress of Henrietta Street had featured the Master. At this point, the BBC novels were wanting to jettison existing continuity as a source of stories. There is a degree of inconsistency at work here, because the Doctor has no memory of Iris or other Time Lords, despite his previous encounter with the Master.

The regulars are done really well here. The Doctor comes across as knowing what is going on all the time, but keeping quiet just because he enjoys the fun of investigating. Anji is really smart, sassy and very likable here. Fitz seems determined to enjoy himself regardless of how bizarre the adventure turns out to be. There is a wonderfully insane moment when the talking poodles force the Doctor, Anji and Fitz to strip naked, wear collars and walk on all fours. When they protest they are told "Bad people!" It's a delightfully camp scene.

As with other BBC novels set after Ancestor Cell, the presence of magic is very pronounced. There is no explanation for how Noel Coward's magic pinking shears work or how the animatronic monsters are able to come to life. These things are written so well that you don't really stop to think about them or question them.

There is a little bit of excessive violence towards the end and a surprising reference to bestiality, but none of this detracts from the light-hearted tone. This is a novel that I enjoyed immensely.
Posted by Matthew Celestine at 07:31