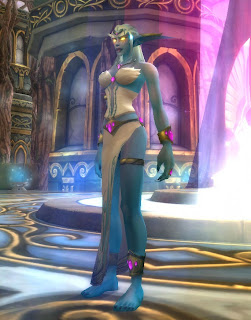 The second part of my Doctor Who/ World of Warcraft crossover.


The Doctor doubted he had been in a room this size since leaving Gallifrey. It truly was magnificent. At the far end of the palace lounge, a group of scantily-clad night elves were performing a frenzied dance routine. Their gyrations were a wonder to behold.

The Doctor reclined on a couch. Azshara sat with him, with one leg positioned over his seductively. She planted a kiss on him at every opportunity. It had been a long time since anybody had been so enamoured of the Doctor.

"Tell me, Doctor, is your world as beautiful as this one?" asked the night elf queen.

"Certainly, my dear. The sky is a burnt orange and the leaves on the trees are silver. The Capitol, the great city is a wonder of glass and marble, with many picturesque spires and domes," he replied.

The Doctor was certainly enjoying Azshara's attentions. Her blue skin and long pointed ears were a little odd and her naked feet were surprisingly large, but she was was undeniably beautiful. She was clearly in love with him, though it was an odd kind of love. Her mind did not seem to be able to distinguish her desire for him and her desire for his vast knowledge and mastery of time travel. For all that Azshara was beautiful, the Doctor was convinced she was vain, self-absorbed and at least a little bit stupid. She also had a terrible dress sense with that skimpy dress and those tasteless pink jewels. No Time Lady would have worn such an outfit.

"Grandfather!" came a voice from the other side of the room. Susan skipped barefoot into the room with her usual girlish enthusiasm. Azshara silently cursed with rage at the arrival of the Doctor's wretched granddaughter.

"I've had such a wonderful time today, grandfather," said Susan. "You know I got to ride this massive Saber-toothed cat. It was rather frightening, but it was very fun once I got used to it. I also met a druid. He gave me a really interesting lesson in how magic works. This universe really is quite different to our, grandfather."

The Doctor heard nothing of what Susan said to him. He was too distracted by the shock of her outfit. His granddaughter was wearing only a leather bikini and loincloth. Most of her bottom was exposed to the world. She also wore a bracelet on her thigh.

"My child, I really don't think you ought to be wearing something that leaves so little to the imagination, especially not at your age," he managed to say.

"But all the Kaldorei girls dress like this," protested Susan.

"I noticed some of the Kaldorei ladies are dressed rather more modestly, like Queen Azshara here," said the Doctor. As he said this, he was painfully aware that Azshara's minimalist dress was barely any improvement on Susan's bikini and loincloth.

Azshara was quite amused by this exchange. She clapped her hand and a maidservant approached.

"Worthy Doctor, you have the sensibilities of a dwarf," said the queen. She turned to the maid. "Go to Lady Vashj. Instruct her to find a dress for this youngling," she instructed.

Susan made a sulking expression and followed the maid.

Glad to be rid of the girl, Azshara returned her attention to the Doctor.

"I have waited a long time to find a suitable mate, Doctor. None of the males of my own people could ever suffice. You shall give me children who have your wisdom, nobility and dignity," she said.

The Doctor was really not sure he needed any more children. His granddaughter, Susan, was a handful enough on her own.

"You must stay here and rule at my side, Doctor. You can give me the wisdom I need to purify this world and rid it of imperfection," said the queen.

"I think, my dear, there is something to be said for imperfection," said the Doctor. "Take me for instance, I'm hardly the most impressive looking specimen to grace this world? Hmmm?"

Azshara seemed surprised by this suggestion.

The Doctor continued. "Or take your dress for instance. On some worlds, that dress would be considered quite scandalous and very much imperfect. Yet here it is considered to be very much the thing to wear for ladies."

Azshara had never considered such a notion.

"I rather fear, my dear, that your notion of imperfection is people who ask too many awkward questions about your rule," said the Doctor with a smile.

As the Doctor and Susan returned to the TARDIS, Azshara followed after them.

"You cannot leave me behind here, Doctor!" pleaded Azshara. "I need your wisdom, your power, your knowledge."

"I am sorry but my destiny lies there," said the Doctor, pointing to the Well of Eternity. "Your destiny lies with your people. Do rule them sensibly, my dear."

"If you cannot stay, take me with you! I could be your companion. We could travel together through time and space! You can show me the wonders of many worlds!"

"I really don't think so," said the Doctor and closed the TARDIS door.

With a wheezing, groaning sound, the statue of Azshara disappeared, leaving the original alone in her imperfect world.


Inside the TARDIS, the Doctor snorted at the absurdity of Azshara's suggestion. Take a companion? Travelling with his granddaughter was company enough. The very cheek of it!
Posted by Matthew Celestine at 12:30