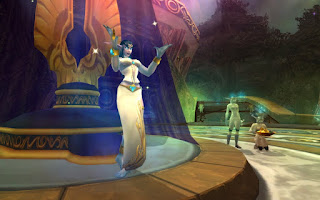 A Doctor Who/ World of Warcraft crossover.

Azshara queen of the night elves uses her magic to lure a powerful being to Azeroth. But instead of Sargeras, it turns out to be the First Doctor.

Note: This is a pre-Unearthly Child story. The TARDIS is not yet stuck as a police box.

Azshara watched anxiously as the Night Elf highborne focused their magical energy onto the Well of Eternity. The portal they had created crackled and swirled with sorcerous power.

It was Azshara's plan to bring to Azeroth a great and powerful god; one who would marry her, rule at her side and rid the world of imperfection. As the magical force in the Well of Eternity intensified, she could sense the god's presence.

Azshara was startled when she heard a strange wheezing, groaning sound. It sounded quite abhorrent to her long pointed ears, but she sensed that it heralded the god's arrival.

Something began to materialise before the Well of Eternity. To her amazement, she beheld a statue of herself. It was identical to countless statues across Zin-Azshari. It was hued from the finest granite. It was dressed exactly as she was, in a sleeveless gown split at the side, exposing her shapely thigh. Its stone feet were bare.

What greater honour could the god bestow upon her but to send an image of a very form? Truly this being from beyond the cosmos had accepted her devotion!

The night elf queen was even more surprised when a door seemed to open in the statue. Two strange creatures stepped out. They both had peculiar skin in a colour that Azshara found difficult to describe. Their ears were tiny and rounded. One of them was old and wizened with white hair. He walked with the aid of a stick. The other appeared much younger and was clearly female, despite her alien appearance.

"So we've come to a different universe, grandfather?" asked the female being.

"Hmmm,yes, my child. We seem to be making a habit of it since visiting Quinnis in the Fourth Universe. This one appears to be a quite different place," replied the old one.

Azshara boldly approached the two strangers, her jewelery tinkling as she moved daintily on her bare feet.

"Greetings, great lord from beyond," said Azshara. "Welcome to this world. I am Azshara, queen of all the Kaldorei. You do me great honour in arriving in a vessel shaped in my own likeness."

The old one smiled.

"Yes, it changes shape when it arrives. I do think it does quite nicely in that one."

Despite his aged and humble-looking appearance, Azshara knew that the old one was a being with tremendous wisdom and terrific power. She felt love arising in her heart already. She had to win him and learn his secrets!

"May I ask your name, great lord?" asked the night elf queen.

"Yes, of course. I am the Doctor," he replied. He gestured to his female companion. "And this is my granddaughter, Susan."

Susan gave the night elf queen a shy smile. Azshara looked at the girl and decided she absolutely hated her. Why did the great lord Doctor have to arrive in the company of such a pathetic little girl?

"I offer you both the hospitality of my palace. You are honoured guests in my lands."

Azshara summoned her highborne to her side. They bowed low before the Doctor and Susan.

"Lady Vashj here will show your granddaughter the sights of Zin-Azshari and introduce her to suitable young companions. I am sure she will enjoy that. Then you and I can talk of great things, Doctor," said Azshara.

Susan protested. "I'd much rather stay with my grandfather, if you don't mind," she said.

"Nonsense, child," said the Doctor. "You go off and have fun. I think Azshara and I have adult things to talk about." He winked at the night elf queen.

Susan sighed and followed Lady Vashj. Azshara took the Doctor's hand and began to lead him towards the palace.

The Doctor found all this very amusing. These Kaldorei creatures seemed to think he was some sort of god. They were clearly a primitive and superstitious people. On the other hand, their queen seemed to be taking a very personal interest in him. He had absolutely no objection to that. This was looking like a very stimulating trip.
Posted by Matthew Celestine at 05:09