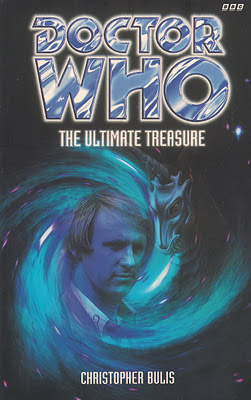 Quest stories are great for lazy writers. Just give the characters an objective, an opponent, some obstacles to face and throw in a twist or two to make it interesting. It is a banal strategy, but quite often it actually makes for an enjoyable story. Doctor Who has given us a few quest stories, most notably The Keys of Marinus and The Five Doctors. Christopher Bulis manages to pull this off rather well. Admittedly, it feels like it is aimed at younger readers and it is rather slow to get going, but halfway through it is a fairly exciting, if unadventurous read.

This is a Fifth Doctor and Peri novel. That is what got me reading it, as I am quite a 5/Peri fan, even though I admit the improbability and silliness of a gap between Planet of Fire and Caves of Androzani. Both Doctor and companion are characterised very well. Bulis manages to maintain the sense that Peri is new to the business of travelling in time and space. That said, he rather fails to capture the bleak and tragic feeling of Season 21. This feels in general like a positive and upbeat book that contrasts quite a bit with the televised story that follows it. In particular, Bulis gives us a silly retcon regarding Kamelion that rather undermines the tragic narrative of Season 21.

The Ultimate Treasure has a great cast of characters. The police officer,Myra Jaharnus is notably strong, but Alpha the villain is also interesting. Dexel Dynes the reporter is a bit of a caricature, but he is still very fun. The scene in which he interviews one of the criminal goons is very amusing.

That the treasure turns out to be something other than what is expected is no surprise. This novel borrows rather obviously from The Five Doctors in it's resolution.

This is not a deep or clever novel, but it does offer an easy, fun and undemanding read.
Posted by Matthew Celestine at 03:30