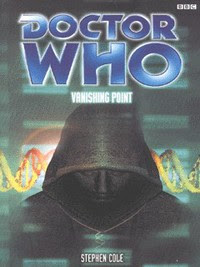 Did Stephen Cole really co-write the underwhelming Ancestor Cell? This book is so much better!
This is not a light-hearted book. It deals with serious themes, most notably that of religious belief. It is also very violent (though some of the Virgin NAs are more graphic). All of the characters are continuously put in physical danger and they have to be ruthless and violent just to survive. This actually led me to feel really involved in the book, reading each page with worry about how the characters were going to get through. I seldom find Doctor Who novels as engaging as this.
The society depicted in Vanishing Point feels so much more real than societies in other Doctor Who stories. This is a world in which there are hospitals and police, where people get into trouble for being late for work, where low-paid women have to prostitute themselves to pay the bills, where people have affairs and where there are mentally and physically disabled people. The last point being of particular significance. We have an whole group of people with learning disabilities in this story. How often do we find disabled people in Doctor Who other than a crippled or deformed villain? The writer even departs from convention and has Fitz having sex with one of the disabled girls.
Not only does the planet in Vanishing Point feel like a real place, but the characters feel so convincing and believable. You really feel for Etty with her tragic background and fearfulness, for Nathaniel with his doubts and confusion and for Vettul with her loneliness and frustration. These are characters the reader can understand and identify with. The two companions also come across very well; with Anji contemplating belief in God and Fitz getting involved with Vettul. Whatever one thinks of his going to bed with Vettul, it is done believably.
We see the 8th Doctor in this story as we have never seen him before. Right at the start of the book, he jumps right into the action. He is hardly ever portrayed as so decisive, determined and strong. He is a Doctor who protects the vulnerable and stands for justice. He is also prepared to use violence when he has to. This is a Doctor that evildoers really would fear. One thing that is interesting is that in this novel the Doctor defends the status quo and works with the authorities, even though they are clearly quite flawed. While in stories like Happiness Patrol and The Sunmakers, the Doctor overthrows the Powers-that-be, here he attempts to uphold society.
Where the book does not do so well is in its handling of the big themes. While the discussion about faith in God is interesting, it makes the common error of thinking that faith is incompatible with proof or certainty. The Greek word for faith (pistis) means the same thing as belief. All of us believe lots of things that can be proved and which we are certain about. The New Testament would use the same word faith to refer to those beliefs. The hard science stuff about genetics comes across as rather incomprehensible. I understand the concept of 'junk DNA' is actually quite inaccurate.
Posted by Matthew Celestine at 03:38