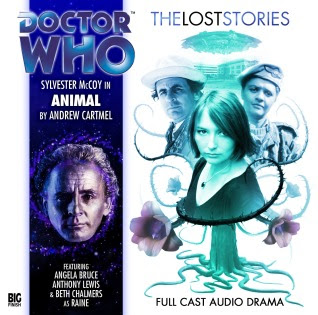 Animal has some stinging, walking plants that are remarkably similar to John Wyndham's Triffids. Sadly, they don't play a massive role in this story, which is a shame because I think the Triffids are the creepiest science fiction monster ever.
Finally we get the return to Doctor Who of Brigadier Bambera. While she does not get to say "shame," Angela Bruce gives a great performance. She's a bit wooden, but she is playing a tough military officer. Bambera has a lovely rapport with Ace. Unfortunately, we also get the return of Dad's Army UNIT. The current membership of UNIT appears to be our lovely Brigadier plus an incompetent, mentally unstable and rather trigger-happy corporal. It is a bit disappointing.
Animal features yet another instance of the Seventh Doctor putting in place a meticulous plot and then finding it go pear-shaped. We have seen this in the New Adventures a few times, and in Big Finish. Unfortunately it is played for comedy here, but rather badly. The moment when the Doctor announces the imminent arrival of the Metatraxi to find they don't show up is incredibly painful. Did Cartmel have to subject the Doctor to that?
The alien race that sidelines the almost-Triffids is the Numlocks. Aside from having a daft name, they are pacifists and ostensibly vegetarian. They are very well realised with John Banks giving them wonderfully dull and dreary voices. They manage to come across as quite sinister.
New companion Raine does not have a lot to do in this story, but as I said in my review of Crime of the Century, I don't like her anyway. We do get an interesting seen when she discovers the implications of time travel by learning of her father's death on the Internet.
Cartmel himself admits that this story is full of his tropes- animal experimentation, environmental issues and secret military technology. It's all interesting stuff, but there are a lot of ideas here that never quite gel into a unified whole. It's hard to see exactly what Cartmel is trying to say in this story.
As with the two previous stories in this series, I found myself getting rather bored. These stories really don't do a good job of keeping my attention. So far these 'Season 27' stories have not impressed me at all. Doc Oho makes the interesting suggestion that this series reveals that John Nathan-Turner may have had more to do with the strengths of the McCoy era than he is generally given credit for.
Posted by Matthew Celestine at 01:57