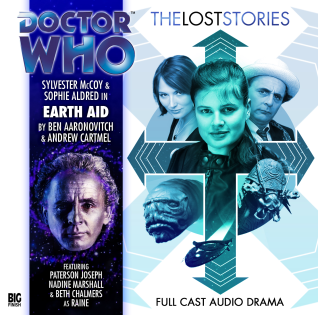 This story was built around a proposed opening scene in which Ace is unsuccessfully impersonating the captain of a starship. This premise leads on to what is essentially a parody of Star Trek: Next Generation. Making a parody of Star Trek back in 1989 would have had a caustic note. Back then Doctor Who was a struggling program, unpopular with both fans and public, while Star Trek: Next Generation was proving a massive hit.
It's a bit jarring to see Ace struggling with trying to captain a starship after reading the New Adventures. The NA Ace would have been totally at ease in that situation. It is a bit disappointing that after the strength of character shown by Ace in her two televised seasons, she is unable to summon up any confidence here. She is written as really stupid in this story. I won't go into the question of whether Ace would have actually watched Next Generation before leaving earth, as it is perfectly possible the Doctor has the DVD collection on the TARDIS. The Doctor is also made into a moron, with him breaking down as he is 'taunted to death.' We have had enough stories where the Doctor is put on a guilt trip for this to be in any way interesting. Raine is rather sidelined for much of the story. Doc Oho points out that she sounds an awful lot like Bonnie Langford in this story, which rather fits with the comic tone.
Earth Aid was a really unimpressive story. It tries to hard to be funny and ends up overdoing it. The plot is badly thought out and fails to deliver anything of interest. The idea of a sentient planet is a really interesting one, as is the charitable organisation, Earth Aid, but these ideas are never given any time or thought. It's remarkable that a writer as strong as Ben Aaronovitch would write something so bad. Does he just not care that much about Doctor Who these days?
This story has the Metatraxi cropping up once again. The way these stories are built around a central story arc, as well as the presence of a few timey-wimey moments is remarkably reminiscent of Moffat Who. It is almost like Cartmel had watched the first Moffat season and thought "Yes! That's how Doctor Who should be done!" I beg to differ.
These 'Season 27' stories have been the biggest disappointment I have ever had with Doctor Who. None of them is in the least bit inspiring. As I said in an earlier review, for me the real Season 27 was the New Adventures. Forget everything Big Finish has done with Ace, none of it is at all interesting. The New Adventures took up Ace where Survival left and did amazing things with the character. These stories have done nothing to add to the character. The addition of Raine is just candy, and its candy I don't care for much.
Posted by Matthew Celestine at 03:19