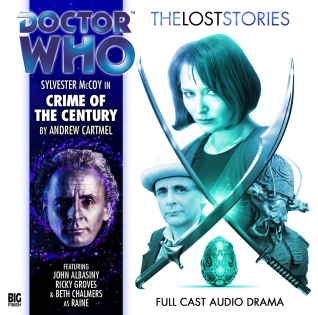 This is the second part of the lost Season 27. Despite keeping Ace on board, contrary to the original design, it sees the arrival of new companion Raine Creevy (Beth Chalmers), as well as the Samurai-like insect aliens, the Metatraxi.
One interesting stylistic feature of Cartmel's novel Cat's Cradle: Warhead was the minimal dialogue. The characters frequently said nothing to each other. This was clearly a good thing as Cartmel serves up some really appalling dialogue in this audio, most notably Ace's shockingly bad line "Come back and fight, you sexist Metatraxi!" This really does not fill me with confidence in Cartmel as a script writer. Maybe he was better at editing the scripts than writing them.
The new companion Raine seems to have proved popular with reviewers, but I'm afraid I don't care for her. She is sassy and confident, but that is not exactly unusual in modern science fiction. A posh cat burglar is a bit too much of an obvious television trope. Maybe I am a bit of an old fashioned moralist, but somehow I really do have a problem with 'good characters' who are thieves. I mean, stealing is actually wrong, is it not?
I agree with another reviewer, who points out that the tone of this story is rather uneven. It is very dark in places, yet the Metatraxi speaking like surfer dudes as a result of a translator malfunction is incredibly comic. Even more problematic, many elements of the plot do not really fit together, such as the revelation that the recession that ruined Raine's father was engineered by the Russians. Apparently, this is the 'crime of the century' in the title, which is odd given that the story is about alien weaponry. At the conclusion, we are treated to another revelation that seems even more pointless and irrelevant to the plot.
This is on the face of it, remarkably similar to the story that preceded it. A Soviet setting, war-like aliens and a struggle between different factions for alien technology. This is even more disappointing given how much that story owed its plot to Remembrance of the Daleks and Silver Nemesis. I can't help feeling that Cartmel is a bit short on ideas, which is ironic given how he has criticised much of classic Doctor Who plotting for being formulaic.
Posted by Matthew Celestine at 06:52