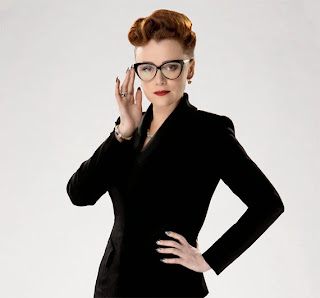 Wow, I actually liked this one!

The very enjoyable Rings of Akhaten showed that once they get the Doctor and the TARDIS away from Earth, the production team can sometimes come up with a decent Doctor Who story.

Taking the standard tropes of a heist/ crime thriller, this episode delivers an exiciting piece of science fiction action. This story does not do anything amazing or radical, but it is a solid and entertaining story all the same.

Time Heist is well served by an interesting set of guest characters. What is more, we get an interesting and very enjoyable villain in Madame Karaborax and her clone. The alien monster, the Teller is very effective and scary looking, even if it has become something of a cliche in the new series for monsters to turn out to be nice creatures in the end.

I'm not a big fan of plots which revolve around the mechanics of time travel and backward story telling, but the time travel elements are not too confusing here. I'm a bit concerned though, that Dr. Who might have altered history by freeing the Teller. I don't think he should be able to do that. I was very pleased and relieved that Karabarox did not die a gruesome death, as I expected, but got the chance to feel remorse for her actions.

There are a few problems with the plot, such as how the Doctor got into the bank to place the architect's gadgets. However, these are the sort of problems with most Doctor Who stories.

Along with Rings of Akhaten, this is among the better stories of the Moffat era.

Posted by Matthew Celestine at 09:46