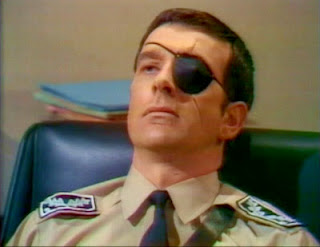 A lot of Doctor Who stories are padded out to fill extra episodes, but Inferno takes padding to a completely different level. The orginal story about a drilling station and green slime turning people into werewolves would have needed padding to fill out four episodes, but this serial had to stretch to an impossible seven episodes. The ever resourceful Terrance Dicks came up with the idea of filling this out by taking the Doctor to a 'mirror universe' version of the same setting, with Fascist versions of the main characters. Conveniently, this removed the need for new sets and hiring new actors. All it required was a slightly higher costume budget and Nicholas Courtney to spend a bit longer in the make-up chair.

A lot of fans think the idea of the 'mirror universe' is a fantastically clever one. I don't. As Phil Sandifer points out (there is very little in his Inferno essay that I disagree with), the idea of a mirror universe is one that television writers continually turn to. It's a very standard trope. It's not used in a particularly creative way in Inferno. The Doctor's witnessing of the destruction of the mirror Earth does not give him any new insight that enables him to save the regular Earth. It simply feels like a way to draw the story out and we are denied the pleasure of seeing the Fascist characters meeting their other selves.

That is not to say that the Inferno-verse is not fun to watch at times. The actors are clearly enjoying the chance to be evil for a while. Nicholas Courtney is particulary memorable as the sneering Brigade Leader. This is possibly a problem for Caroline John's Liz Shaw. Liz never really had much personality or character development. It is actually only when she becomes a Fascist that she appears to be an interesting character who we want to watch. Furthermore, the Fascist world is never really explored. It never really offers more than a fleeting glimpse of what this world is like. It seems perhaps a little surprising that the royal family were executed in this world. In our world, the British Union of Fascists supported the monarchy and our royal family were hardly left of centre in their views. Perhaps the mirror universe regime is closer to Communism than Fascism. Or more accurately, given the Terrance Dicks input, they are a British version of those nasty foreign bureacratic types that we British patriots all hate and UKIP imagine are running the European Union. 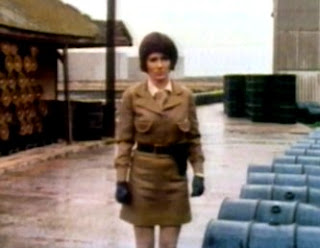 Of course, Inferno has some great direction, thanks to Douglas Camfield, with Barry Letts filling in when the director became ill. This story has some enjoyable moments, but for me it is just too long and bores me. This is not a classic by any stretch.

It has been said that the first four episodes of a new Doctor's run follow a pattern. The first story is a frenzied runaround (Spearhead from Space- not much plot going on), the second story is one more suited to the previous Doctor (Dr Who and the Silurians- the old base under siege) and the third story an experimental new kind of story that is not really repeated (Ambassadors of Death- realistic elements at the forefront and science fiction elements kept in the background). It is the fourth story that defines the new era. With its theme of industrial research, energy sources, green slime, Venusian Akido and pointless car chases, Inferno sets up the Third Doctor era perfectly. All that is missing is Jo Grant and the riotous colours that came in with Claws of Axos. 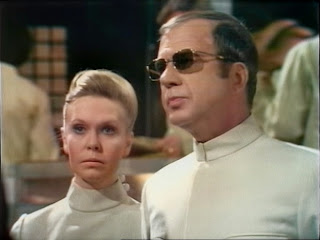 It does seem remarkable given all the massive historical differences between our universe and the Inferno-verse, that all the main characters are all together in an almost identical scientificc installation. The novel Timewyrm: Revelation offers a handy explanation that this universe has been artificially constructed. I did come up with my own theory as to the nature of the Inferno-verse. In The Chase, the Doctor conjectures that the TARDIS had entered a realm formed from human fears. It seems surprising that the Doctor would suppose that such a psychological world existed and that the TARDIS could take one there, but perhaps the Inferno-verse is this 'land of fears?' Could the Inferno-verse be a sort of projection of the Doctor's own fears about the drilling project? It occurred to me that the Republic Security Force represent the Doctor's anxieties about working with a military organisation. It's worth noting that the Brigade Leader is not that far removed from the Brigadier in personality. Notice the scene in Inferno where the real Brigadier rants at Benton and orders him to act like a bully and to coerce Stahlman. Of course, this theory contradicts the novels in which the Inferno-verse is a real place.


So what is going on with all that green slime? Some of the New Adventure novels hint at the idea, championed by Lawrence Miles, that the Earth is an artificial planet. After the Time Lords first experimented with Time Travel, they unleashed the vampiric Yssgaroth from a hellish other-universe. After Rassilon defeated the Yssgaroth, he fixed up the holes in the universe with artificial planets, Earth being one of these. Thus, the weird green slime that seems to defy the laws of physics is matter from another universe. This is supported by Planet of Evil, in which material from another universe has a similar effect in turning people into werewolves.

I think the Yssgaroth/ Hollow Earth theory fits Inferno perfectly. The very title of this serial captures the idea of hell being underground. The drilling station is not simply causing an ecological disaster, but is awakening demonic forces. Notice that the Primords and Stahlman in particular act like they are under the control of some unseen force. They are being controlled the Yssgaroth, who want to escape and unleash havoc on the universe (no pun intended).
Posted by Matthew Celestine at 08:00