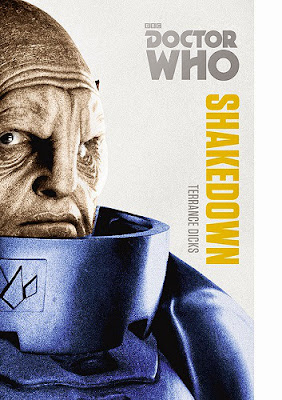 Shakedown, originally a Virgin New Adventure, was republished by BBC Books as part of a series of novels called 'The Monster Collection.' These all featured images of New Series monsters on the cover art. Having a New Series Sontaran on the cover is fine with me, though the New Series Eocene on the cover of the newly repuglished Scales of Injustice seemed a bit weird. Nevertheless, I was glad to see Virgin novels being republished by BBC books. I was disappointed that the Remembrance of the Daleks novelisation rather than a New Adventure was re-released as the represenative Seventh Doctor novel. That said, the New Adventures were not really about reviving famous monsters, they were about doing new and exciting things with Doctor Who.

Shakedown began life as a fan made video production, featuring the Sontarans, but not the Doctor. It was scripted by Terrance Dicks, apparently for a very minimal fee. Terrance Dicks was later approached by Virgin, who wanted him to adapt it as a novel featuring the Doctor. Instead of changing the story of Shakedown to include the Doctor, Dicks did something rather more interesting. He wrote a basic novelisation of Shakedown, then included this as the middle section of a longer novel. This novel created a literary backstory for the fan movie. This involved the Doctor and his companions pursuing a Rutan spy.

Shakedown is written in that minimalistic, unfancy prose which characterised Terrance Dicks' novelisations. The middle section, based on the fan movie, is very reminiscent of his Target novels. However, it also draws on his Virgin novels too, with the playfulness and the endless references to other Doctor Who storie, especially Uncel Terry's own scripts. And with it being a Terrance Dicks, a female character inevitably gets threatened with rape.

As with some of his other novels, Dicks tends to make the Seventh Doctor seem more like Pertwee than McCoy, though he gets Bernice, Chris and Roz spot on. The Sontarans were portrayed more sympathetically here than in the Classic Series, one can see the emergence of the friendly Sontarans of the New Series. I was rather glad to see the Rutans getting a bit more attention here. I think they are a great monster.

There is some great world-buiding here, especially the planet of insectoid Oxford dons. Likewise, Dick's portrayal of the corrupt and anarchic Megacity has a cynicism to match the late Robert Holmes. The most striking character we are introdued to is the Ogron police chief, a polite and educated Ogron, who sips tea and eats cakes. Before we can applaud Dicks for breaking stereoypes, it turns out that this Ogron has been surgically altered. This is rather disappointing. Dicks just assumes Ogrons are all dumb because they conform to racially suspect stereotypes. Wouldn't it have been nice if Dicks had given us an Ogron who really did fail to conform to the cliche (without having been 'civilized' by surgery)? But we can hardly expect Uncle Terry to be progressive.

This is a fun novel with plenty of action. Readers who have grown up with Terrance Dicks' Target novels will very much enjoy this.


Posted by Matthew Celestine at 12:24