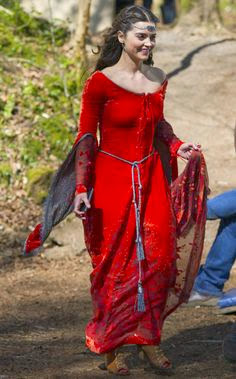 I generally find Mark Gatiss' stories unbearably awful, so I was not looking forward to this. It turned out to be rather better than I expected. Much of the strength of the story lies in Tom Riley's delightful performance as Robin Hood, effectively managing to rival Capaldi's Dr. Who as the leading man.

A colleague of mine offered his opinions to me about the new Doctor. He said he thought there was too much of a tension between the attempt to make the Doctor more serious and a continuing tendency to make the Doctor very quirky and funny. I think he is largely correct. Robot of Sherwood seems to attempt to address this, by putting the Capaldi's grim and dour Doctor next to a character who is flippant and jokey.

Mark Gatiss' preferred genre is the celebrity theme park historical. He seems to place with this here by having the Doctor suspicious of just how much this Robin Hood conforms to genre. I ended up feeling slightly disappointed when Robin turned out to be the real thing. The story had set up the idea of a false Robin and then given us a real one. I think this was trying too hard to be clever. If you want to put Dr. Who in an Eroll Flyn type Robin Hood adventure, just do it. You don't need to lampshade it. Of course, I'm not sure how familiar this old fashioned picture of Robin Hood will be to younger viewers. For them Prince of Thieves seems as ancient as Casablanca.

On the whole this is a rather dull story. Like any New Series pseudo-historical, there is some alien mucking about who gets sorted out very easily by Dr. Who. The alien robots here are developed enough to be interesting, though it is implied they might be connected to the robots in Deep Breath.

I was not quite convinced by Clara's scene with the Sheriff. The way she was pumping him for information seemed just a bit too obvious. His line about "First Nottingham.." was good though.

Having a short Little John is not funny. The whole point about the character is the irony of him being big.

Robot of Sherwood manages to be fun, but that is more down to the strength of the performances than the quality of the writing.


Posted by Matthew Celestine at 11:18