The Night of the Doctor 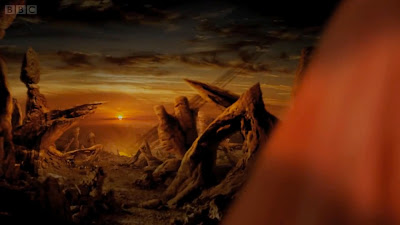 I was in two minds about whether to review The Night of the Doctor. After all, at just over seven minutes, it is essentially an extended trailer for the anniversary special. It's rather hard to review something this short.

Visually, it has lots of special effects, indicating that the BBC is spending lots of money on the anniversary episode. It would be nice to hope that the same effort goes into the writing, but I very much doubt it given what we have seen in the last couple of years.

This mini-episode is clearly geared toward appealing to fans. Not only do we get the return of Paul McGann, but also the Sisterhood of Karn. Nevertheless, despite the fantastic visual affects, I' very disappointed by the dull costumes worn by the sisters, They have nothing on the exotic outfits they wore in The Brain of Morbius. What is the point of putting loads of effort into CGI when something basic like costumes ends up looking shoddy in comparison with a Seventies serial?

I'm not altogether happy with the decision to show the Time War. I think some things within Doctor Who are best left to the imagination. The Time War shown on television will just end up being a lot of spaceships and explosions, when it should be something much more complex and difficult to visualize. Remember that great line from The End of Time?

You weren't there. In the final days of the war. You never saw what was born. But if the time lock's broken then everything is coming through. Not just the Daleks, but the Star of Degradations. The Horde of Travesties. The Nightmare Child. The Could-Have-Been King with his army of Meanwhiles and Neverweres. The war turned into hell! And that's what you’ve opened. Right above the Earth. Hell is descending.

How do you portray something as surreal and intriguing as all that?

Posted by Matthew Celestine at 06:15