Genesis of the Cybermen (yes, you read the title right) 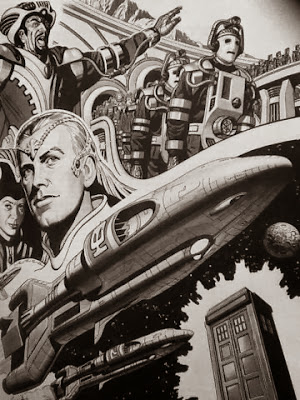 Genesis of the Cybermen was a script written by Gerry Davis, creator of the Cybermen and submitted to Eric Saward, script writer for Doctor Who. It was rejected, yet was included as a short story in David Banks' (clenching fist) excellent Cybermen book. It is regrettable that this short story is written more as an outline or an extended synopsis, featuring no actual dialogue.

Poor Gerry Davis seems to have been a bit confused by all the comings and goings among the TARDIS crew. Having lost track of exactly who Dr. Who was supposed to be travelling with, he has her accompanied by a pretty but light-headed blonde girl called Felicity.

Genesis of the Cybermen, as its title suggests, gives us a glimpse of the origin of the Mondasian Cybermen as Gerry Davis conceived it. As much as Eric Saward liked stories about Cybermen and lots of continuity, it is pretty easy to see why he rejected this. It is very much an old fashioned space adventure in a pseudo-Tolkienesque society in which everybody has a Latinized name. This sort of story would have looked dated if it had been done in the Pertwee era, let alone in the 80s with Peter Davison or Colin Baker. It is also structured like an over-padded Doctor Who story, with lots of capture and escape routines.

Yet this story would have fitted very neatly into the Hartnell era, despite the presence of the Cybermen. With his forgetfulness, the Doctor in this story comes across as very much more like Hartnell than Davison or Colin Baker. Genesis of the Cybermen has that fairy tale quality that is often found in First Doctor space adventures. It feels like it could have been a Wagnerian, particularly as it features a Valkyrie-like blonde queen who has been partially cybernised. Steven Moffat talks about wanting to give Doctor Who a 'fairy tale' quality, but I rather doubt he has ever read the Brothers Grimm or the Blue Fairy Book. His awareness of the fairy tale genre does not seem to stretch beyond Disney adaptations and I imagine he thinks Mary Poppins was in the Brothers Grimm. He really should read this story to find out how Doctor Who can have a fairy tale quality.

The story compounds its datedness by offering a nod to Von Daniken. We learn that some of the Mondasians fled to Earth after Mondas drifted from its orbit. They apparently left many artifacts for archaelogists to puzzle over. This naked Von Dankienism is certainly implied in The Tenth Planet, with the talk about Mondas being an ancient name for Earth.


Is Genesis of the Cybermen canon? We cannot treat every unmade story as canon, but certainly those reproduced by Big Finish are candidates. The Cybermen book was published by arrangement with the BBC, so it might be said to be a licensed product. True, it is difficult to harmonize some aspects of this story with Spare Parts, but no more so than the difficulties in harmonizing Spare Parts with The World Shapers.

So if this is a story that 'really happened,' when is it set? Although this was submitted to Eric Saward, I really don't think this is a Fifth or Sixth Doctor story. The Doctor seems to have little recollection about Mondas and the Cybermen, while those 80s Doctors had a pretty good grip on continuity. It seems likely therefore, that the Genesis of the Cybermen Doctor is the First Doctor. So when did he travel with Felicity? This must have been one of those mysterious gaps in the television stories during which the World Distributors annuals and TV Comic First Doctor stories are set. This could be in between The Dalek Masterplan and The Massacre, or it could be before the end of The War Machines, before Dr. Who returns for Dodo. We might well wonder whatever adventures Dr. Who might have had with Felicity.
Posted by Matthew Celestine at 03:23