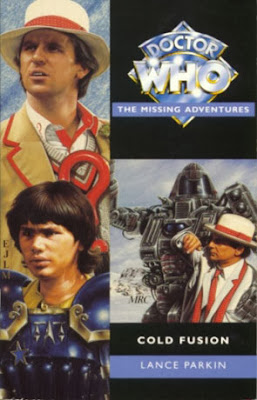 "Turning her over onto her front, kissing the back of her neck, his hand running down her body. His thoughts dipping into hers, tasting her emotions. She was propping herself up on her elbows. Her body was familiar, he'd known it for centuries, seen it for centuries, seen it age ever so slowly. The birthmark on her ankle, the pattern of freckles on her shoulderblades. Only he had ever had those thoughts."

The above is one of the rather racy memories that Dr. Who experiences when he mindmelds with "Patience" a mysterious woman from ancient Gallifrey who turns out to (probably) be his wife. That the Virgin novels would include sex scenes involving, or at least appearing to involve, Dr. Who is an example of just how radical they were. Of course, the introduction of the lost Doctor's wife is not the only ambitious thing about this Missing Adventure. It is multi-Doctor story involving two Doctors, two sets of companions, includes an encounter by the Doctor with Adric after his death, as well as a complex plot involving another universe and dealing with themes of political conflict and a clash between magic and science. More than any other Missing Adventure, Cold Fusion pursues the New Adventures path of radically reshaping what Doctor Who can do. Lance Parkin is one of the few Doctor Who writers who could write a novel like this and he truly makes it work.

Lance Parkin pursues a somewhat ambivalent course with Patience. In some parts of the book, it is implied that she is the Doctor's wife. Yet he also implies, equally strongly, that she is the wife of the Other, an ancient Gallifreyan who was an associate of Rassilon and Omega. Since Remembrance of the Daleks, the Seventh Doctor material has hinted at a connection between the Other and Dr. Who. This myth arc was concluded with Lungbarrow by Marc Platt. This revealed that Dr. Who was an reincarnation of the Other. It also made the monstrous and abominable suggestion that Susan was not the Doctor's granddaughter, but the granddaughter of the Other. This is a terrible idea. Not only does it pander to the preference of some fans for an asexual Doctor, but it seems to diminish the genuine bond between the Hartnell Doctor and Susan. Lance Parkin seems to play a double game in Cold Fusion; on the one hand implying that the Doctor is a reincarnation of the Other and on the other hand implying that the Doctor was really married to Patience in some time in the past. He also stronly implies that the Doctor (or Other) married to Patience was one of the Morbius faces, specifically the Douglas Camfield face. I have said before that I do not care for the idea of pre-Hartnell Doctors. However, as the Doctor's experiences are only revealed through recovered memories when he mindmelds with Patience, the reader is left free to figure it out themselves. The Infinity Doctors seems to contradict this. The Infinity Doctor tells Patience that he is in his old body, while she has regenerated. This would imply that the Infinity Doctor has not regenerated, that he is a younger Hartnell Doctor and that there are no pre-Hartnell incarnations.

Freed from the constraints of the Virgin editorship, Parkin would go on to write Gallifrey Chronicles and The Infinity Doctors. While neither book is exactly intended as a retcon of Lungbarrow, Parkin drives a few nails into the coffin of the Virgin novel, by giving the Doctor biological parents and implying even more strongly in The Infinity Doctors than in Cold Fusion that the Doctor is the husband of Patience and the biological grandfather of Susan. Many fans have wrongly assumed that The Infinity Doctors is an apocryphal Unbound Adventure that does not take place in real continuity. This is a mistake; Lance Parkin incorporates it into his AHistory chronology, while acknowledging the conflict with Lungbarrow. Other fans have treated Infinity Doctors as an 8th Doctor story, taking place on a reconstructed Gallifrey. Parkin has stated this was not his intention and it is contradicted by the fact the Infinity Doctor is surprised by Patience's regeneration. It is clearly set in the Doctor's past, but Patience's future.

In trying to make sense of how Patience fits into Doctor Who continuity, I not only consulted Parkin's own AHistory, but I also bravely attempted to study the perplexing and bewildering chronology of the Doctor on Curufea.Com. Curufea offers a fascinating attempt to tie up disparate sources about the life of Dr. Who and the history of Gallifrey. It is difficult to read because of the multi-coloured text and like most fan chronologies, it completely ignores the TV Comics and World Distributors annuals (as does AHistory sadly). According to Curufea, Patience was in a love triangle with Omega and the Other in the Dark Times of Gallifrey. She went on to marry one of the Morbius Doctors. When the Time Lords began to kill their children for being womb-born, she travelled back to the Dark Times to ensure Susan's safety, possibly in the company of her son. She then attempted to leave ancient Gallifrey in a proto-type TARDIS, only to be discovered in Cold Fusion.


The attempt to re-sexualize the Doctor that we see in Cold Fusion (and in Infinity Doctors) has been done very differently from the New Series. While the Tennant Doctor kisses one woman after another, the Fifth Doctor in Cold Fusion recovers tender and bittersweet memories of a love we have never been allowed to see. Contrast Patience with the horrible attempts to create a "Doctor's wife" in the New Series. We get the pathetic notion of a man wishing his car was a sexy woman in The Doctor's Wife and elsewhere, we get River Song, a character who tastelessly flirts and who exists primarily to serve Moffat's banal and mechanical plot-writing. Patience, on the other hand, is a beautiful and mysterious figure, elegant and almost goddess-like. Somebody we can imagine being married to the Doctor. Like him, we never know her real name (of course, he is called Who, but this may be a pseudonym). In a DVD commentary, Andrew Cartmel suggested that it was a mistake that the Doctor was given a granddaughter at the birth of the show. In his opinion, the Doctor should not have a family. Cartmel did a great job as script writer in the 80s and he did write the hauntingly brilliant Cat's Cradle: Warhead, but a lot of his ideas about Doctor Who are very wrong. That is certainly one of them. That Dr. Who has a granddaughter actually makes him more mysterious. It means that he had children of which we know nothing. What happened to them? It also implies he had a partner of whom we know nothing. What happened to her? Cold Fusion offers us a glimpse of the answers to these questions, but still leaves the Doctor and his past as mysterious as before.

Forgive me if I am talking a lot about Patience and forgetting the novel. The introduction of this character is such a bit development that it does almost overshadow the brilliance of the novel itself. Cold Fusion is extremely well written. Lance Parkin does a great job of portraying two Doctors, the Fifth and the Seventh, along with their companions, Tegan, Nyssa and Adric, and Chris and Roz. Parkin's prose has a strong flavour of Terrance Dicks. One thing that he particularly excels at is writing action scenes, never allowing the reader to be bored by his prose. It is very much in the style of a Seventh Doctor adventure, but it manages to fit the very different Fifth Doctor era characters into it.

Posted by Matthew Celestine at 04:18