Revenge of the Cybermen 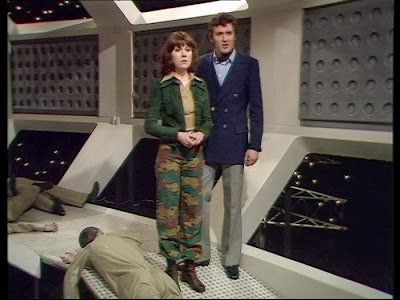 Revenge of the Cybermen was the first Target novel I ever read. It was my first experience of Doctor Who after reading the 1966 Dr Who Annual (how weird is that as an introduction to Doctor Who?), before watching any televised stories. I immediately followed it by reading the novelisation of Moonbase, purchased at the Doctor Who Exhibition at Longleat Safari. A few months later, I watched Revenge of the Cybermen on VHS and loved it as much as I had loved the novel. Over thirty years later, I am confronted by the fact that fan orthodoxy holds this story to be rubbish.

It is interesting how this story has become the classic example of the rubbish returning monster story. Remarkably so, given how there seem to be far worse candidates, such as The Sontaran Experiment in the same season and Death to the Daleks in the previous season. Phil Sandifer offers the interesting notion that the story is meant to be rubbish, making way for the more original returning monster-free serials of the next season. Of course, I doubt fans watching it at the time saw it that way. I'm pretty sure most viewers enjoyed watching Dr Who do battle with the Cybermen again. I'm also pretty sure people watching the it when it was the first ever VHS release must have loved it too. When considering the faults, it is worthwhile considering the fact that the celebrated Hinchliffe era was perhaps not always as perfect as fans like to think. Every Hinchliffe story has problems and weaknesses, with the possible exception of Brain of Morbius, which is the closest the era came to perfection. Ark in Space has unconvincing monsters and lacks atmosphere due to an overlit set, Genesis of the Daleks is horribly padded, Terror of the Zygons is an unoriginal working of earlier stories, Planet of Evil has a terrible script, Pyramids of Mars has a dreadful final episode and The Android Invasion is unwatchable.

The Cybermen are probably not at their best here, but they are fun. While they suffer for being in colour for the first time, they look effective in the darkness of the cave scenes. Why complain about the Cybermen's apparent anger and hands on the hip gestures? The claim that the Cybermen have no emotion at all has always been a little dubious. The creation of yet another weakness for the Cybermen seems unnecessary, but it seems a small one. We have not yet reached the point where a gold coin will kill a Cyberman; the Vogans' presumably gold bullets just bounce off their armour.

The script for this story is weak, with some really awful lines ('I sometimes think your friend is not quite right in the head' Sometimes? He's only just met him!). Yet there are still things to like about Revenge of the Cybermen. The location shooting in the caves of Wookie Hole with the use of underground river is very effective. The set designs are fantastic too. The Beacon set looks great, as do the ornate chambers of the Vogans. The special effect of the Beacon hurtling toward Voga is not great by today's standards, but I was impressed when I saw it on video in 1990. The Cybermat is clumsy, but it looks more menacing than the original Cybermat in the Sixties. While there are things in the plot that do not make a lot of sense, this is a fast paced story with plenty of tension and excitement.

I love the Vogan designs. They look distinctly non-human, yet still capture individual personalities. Kevin Stoney and David Collings do a splendid job in their roles. Michael Wisher is also good, despite being underused. His use of an handkerchief is a very nice touch.

Tat Wood and Lawrence Miles say in About Time that Vorus and Tyrum are basically another version of the Nice Sensorite and the Nasty Sensorite, or the Old Silurian and Young Silurian. This is not really true, as they are much more complex than this. Tyrum is afraid of outsiders like the Nasty Sensorite, yet he is friendly to humans when he meets them and is appalled by Kellman's murders. Vorus wants to make alliances with the outside world, yet he is hostile to humans who do not fit into his plans and has no qualms about murdering them. These are characters who are not defined by their factional politics. Despite being non-human aliens from 'the planet Zog' they feel like real people. Kellman, the human double agent also makes a great villain. I love the way he smiles as Tyrum describes how wicked he is.

Tom Baker is still settling into his new role at this point. Once or twice here he comes across as though he is not taking the story seriously, something that would become a problem in later years. Thankfully, Hinchcliffe managed to keep Tom in check most of the time after this story.

You have to love Harry Sullivan. He is so at ease with everything. The way he says 'Steady on, old chap' as a Vogan manhandles him is infinitely lovable. As somebody afflicted with dyspraxia, I can't help thinking that Harry also has 'Clumsy Child Syndrome.' It is horrible to see the Doctor being so mean to him. Sarah Jane Smith is also pretty horrible to him too. Sarah is not at her best here, mostly being used as a damsel in distress, though she is pretty resourceful, crossing the underground river in the Vogan boat. She is wearing nice pink socks too.

Revenge of the Cybermen is not the greatest of Doctor Who stories, but it is not nearly as bad as some fans make out.