"I've never seen such an incredible bunch" - The War Games 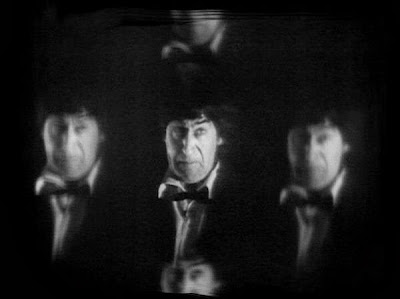 It is appropriate that in the last Second Doctor story, ending the black and white period of Doctor Who, Patrick Troughton gives an absolutely stellar performance. Whether pretending to be an official, manipulating the gullible alien scientist, fleeing in terror or acting the clown before the Time Lords, Troughton displays complete brilliance.

The War Games is a story that fans will always celebrate, after all it is the story in which we first learn of Dr. Who's people the Time Lords and his reasons for abandoning his kind. The fine scripting, the clever blending of historical with science fiction and the impressive acting within this serial are rightly praised. Yet The War Games is let down by the excessive length that was inflicted on it for production reasons. While the extra episodes does allow an interesting exploration of the tense and fractious relationships among the aliens and create a sense of constant peril and chaos for the TARDIS crew, the overall result is a repetitive and seemingly never-ending run of capture and escape routines. It would have worked so much better in six episodes, though this was sadly not an option at the time.

I know it is not the most important detail, but I do wonder if Lady Jennifer Buckingham's hair is authentic for the period. Her hairstyle does look a little modern for 1917. Of course, I could be wrong about that.

The unnamed aliens in The War Games look human, but they definitely have an alien quality to them. David Bree, who plays the Security Chief, gives his character a distinctive slow protracted form of speech. It was also a great decision to cast the Time Lord War Chief as somebody who looks physically distinct to the other alien characters. While the War Chief is handsome, suave and charismatic, the other aliens are pudgy, bald and pasty-faced. They are stereotypical bureaucrats. The best of them is of course Philip Madoc as the War Lord. He is absolutely fantastic. Instead of playing the character with bluster, he is cool and quiet, exhibiting a constant menace. He even smiles when he threatens people. With his scruffy beard, his spectacles and palour, he looks every inch a psychotic. Echoing the Nuremburg Trials, he remains defiant before the Time Lords, refusing even to acknowledge their authority. His terrified cry of 'No! No! No!' as he fades out of existence is a nice end for him.

The other alien who really stands out, even more so than General Smyth, is the fake German officer, Von Weich. He seems to take great delight in putting on different accents, switching from being a German officer, to a Confederate and then to a 19th century British officer. Von Weich must have been so disappointed that there was no Second World War zone and therefore no opportunity to play a Waffen SS officer or a Soviet commissar! This makes a really interesting point about the theatricality of military authority. After all military authority is largely about dressing up and speaking in a certain tone of voice. Also highly effective is the scene where Von Weich and Smyth move about their model soldiers and talk about how they will kill off each others troops. War truly is a game to these people.

The War Chief, the first character ever to be identified as a Time Lord, is very nicely developed. He is a much more complex and interesting character than the Master ever was. It might have been nice if he was an earlier incarnation of the Master, though this is clearly contradicted by the novels, which identify him as Magnus, yet another one of Borusa's errant pupils.


The Time Lords are pretty impressive here, with their incredible power. They are aloof and mysterious. It is unfortunate that they are less effectively used in other stories, though many of the later developments with the Time Lords were not without interest. It is amusing to watch the Doctor clowning around in the court room, dismissing all the faces he is offered, though it is hard not to be bothered by his lack of concern about the Time Lords erasing his companions' memories. It's hard not to laugh at the fact that when attempting to show his people the terrible things in some corners of the universe, he shows them the Quarks. Though admittedly, the Quarks proved themselves in the comics to be resourceful opponents; taking control of domestic robots, making use of a giant wasp and stealing racing cars. Interestingly, he seems to expect the Time Lords to be relatively lenient with him. He predicts that as a punishment, the Time Lords will make him listen to a 'long boring speech.' There is no implication that he would face the same treatment as the War Lord. His terror at capture by his people must have been a terror of losing his freedom.

We know of course, that Dr. Who does not immediately change his appearance after this story. There is a gap between The War Games and Spearhead from Space, referred to by fans as Season 6B. This is shown by two stories, The Five Doctors, in which the Second Doctor is aware of Zoe's departure and The Two Doctors, in which he and Jamie are working for the Time Lords, despite his having no dealings with them during the Troughton era. It seems that after his trial, the Doctor was given limited freedom to travel in the TARDIS, in return for performing missions on the Time Lord's behalf. Season 6B was first revealed in the TV Comic, where the Second Doctor is exiled to Earth before the Time Lords can change his appearance. He takes up residence in the luxurious Carlton Grange Hotel, which remarkably makes it into the newspaper headlines. In a series of stories, the exiled time traveller tangles with criminals and alien invaders, as well as becoming a panelist on a television show. Finally, he is captured by the Time Lords' scarecrow servants, who force him to regenerate. It is logical to conclude that the other TV Comic Second Doctor stories take place in Season 6B, as they do not fit anywhere else in the Second Doctor era. It would seem that some time during this period, Dr. Who was reunited with his grandchildren, John and Gillian. It also seems that Jamie took a break from travelling with the Doctor and temporarily resided in a castle in modern day Scotland. It is possible that other adventures happened in this period, such as Dr. Who's first contest with Fenric and perhaps his first encounter with Lady Peinforte. We have no way of knowing how long Season 6B lasted. Given discrepancies in the Doctor's age, it may have lasted as long as a century.

Posted by Matthew Celestine at 10:04