"I don't know if you're familiar with Wagner's Ring des Nibelung" : Silver Nemesis 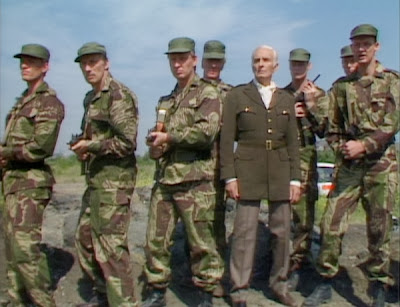 I like Wagner a lot. He's definitely my favorite composer. I got into him when I was 13, at a time when I was going through a worrying phase of interest in the Third Reich. It would be interesting to explore whether there are any Wagnerian elements in Doctor Who. I don't think I have the expertise to write such an essay. Perhaps Phil Sandifer could, though I don't know if he is much of a Wagner enthusiast. It would be a little disappointing if Silver Nemesis is the only Doctor Who story with roots in Wagner.

I love Season 25. It's such a strong season. It begins with two 10/10 serials and ends with a 9/10 serial. Yet stuck between these brilliant stories, there is Silver Nemesis, a serial that is just dreadful. Really dreadful.

One of Silver Nemesis' faults is very similar to that of Dragonfire. Dragonfire is supposed to be set on an ice planet, yet absolutely nobody in the cast acts as though they are cold. It is such a basic flaw one wonders how they could have got it wrong. Likewise, Silver Nemesis is supposed to be set in November, yet everything you see on the screen tells you this is a glorious summer day. Faults like this can't simply be ignored, they ruin whole productions. It is simply absurd to suppose the viewer can pretend this is November when they are watching an outdoor jazz concert with nobody wearing gloves or a woolly hat.

It is generally agreed by fans and critics that there is just a bit too much going on in this story; too many plot threads and too many villains. Having a 17th century sorceress, a bunch of Neo-Nazis and the Cybermen does not leave much room for the exploration of what makes these adversaries interesting. Some fans wish that De Flores and his Nazi pals had been left out, considering them superfluous to the plot. I would have left out the Cybermen; their addition to this was typical JNT shopping list commissioning. I would have beefed up De Flores into a bigger menace and given him more interaction with Peinforte. The messiness of the plotting is not helped by the fact that what there is here is remarkably similar to the season's opener, Remembrance of the Daleks.

The Cybermen are simply rubbish here. They are not a convincing threat in the slightest. While the addition of gold as a Cyber-weakness in Revenge of the Cybermen was unnecessary, at least then it was actually quite difficult to use it against them. Here the Cybermen are terrified of the metal and their chest units explode on contact with gold coins.

Anton Differing, best known for his role in Where Eagles Dare has had a lot of criticism for his performance. I actually think he was alright here. He was not exactly helped by the character being so underdeveloped. I like the fact that he understates the performance. I can't stand cliched, caricatured Nazi characters.

Lady Peinforte comes across very well, particularly as she descends into madness. On the other hand, her sidekick, Richard (with his beard, it's hard not to keep thinking of Richard Branson. I keep expecting him to get into a balloon) is a really badly written character. He starts off as a badass criminal and killer, who brutally murders an old man and who can overpower two skinheads. Then he morphs from this to being a frightened peasant, then a fanatical devotee of his mistress, then finally turns out to be a rather nice chap at the end.


We see in this production one of those faults that has carried over into the New Series, namely an obsession with spectacle at the expense of story. This story throws in Courtney Pine, a Queen-impersonator, Windsor Castle, Cybermen and some American actress. It is all about grabbing attention. RT Davies has gone down this road and so has Moffat. It's a really bad way to produce Doctor Who.

I very much enjoy the exploration in Seventh Doctor stories of the theme of the Doctor's mysteries and the Dark Times of Gallifrey. Unfortunately, this story is not strong enough to hold such weighty themes and they fall slightly flat. When Peinforte threatens to reveal the Doctor's name, he acts like he does not care (we know he is called Dr. Who anyway).

It does seem like Silver Nemesis is the classic story that most provides the template for Moffat-Who, with the mystery about the painting of Ace, Peinforte's empty tomb, the comic tone that detracts from the story, the stuff about the Doctor's name, not to mention the fez. This really feels like it could be an Eleventh Doctor story.


I do like the fact that Silver Nemesis offers no wonky scientific explanation for Peinforte's time travel. She is a magic user, plain and simple. This acceptance of the supernatural can be seen in other Seventh Doctor stories, such as Greatest Show and Survival. Given the mention of Old Time Gallifrey, we might wonder if she trafficks with the Old Ones, such as Fenric.

Posted by Matthew Celestine at 04:31