Daleks Among Us, by Alan Barnes (Big Finish Audio) 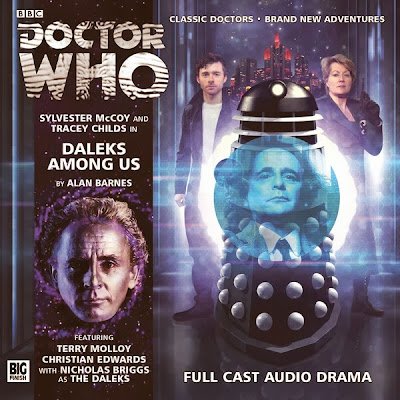 Alan Barnes, what have you done to my favorite character?

I was dreading listening to this audio. The recent Klein trilogy beginning with Persuasion has been disappointing, and I had a feeling that the concluding release would seriously mess up Klein's character arc. It took me nearly a week to pluck up the courage to listen to this CD. I suppose it could have been worse, but I was hardly impressed with what was done with our favorite blonde ice maiden scientist.

I think we can all agree that Klein's backstory is a bit complicated. She is a character whose entire life has been re-written, having previously been the sole survivor of a deleted timeline. Now we are told that the current UNIT version of Klein is a clone who was created by the Third Reich (!) using the DNA of Elizabet Wolfenhart, a sadistic female SS officer, who was also the daughter of another Nazi scientist that we met in this trilogy. Klein was then adopted by Ralf Klein, a German officer who was spying for the British. Let's not go into the unlikeliness of the Nazis obtaining cloning technology. This is Doctor Who, even if this is rather stretching credulity.

Why was all this complication necessary? Klein's backstory was complicated already, but what we knew of it had an elegance to it. It was always plausible that the UNIT version of Klein might have been the Klein that would have existed in our timeline anyway in the absence of the events of Colditz. This retelling of Klein's story makes what we saw before feel very distant. The big question left in my mind is what we are to make of the original version of Klein from the Colditz timeline, the one who travelled with the Doctor after A Thousand Tiny Wings. Did Elizabet Wolfenhart marry Ralf Klein in the Nazi victory timeline? If so, why do the two Kleins look the same? We get confirmation in this story that the UNIT Klein was born in 1945. I do still think Colditz implies that the Nazi Klein was born before the Second World War. The strange development of Klein's backstory makes me wonder how much input, if any, Steve Lyons her creator had into this trilogy. Is this really how he imagined the character?

The original Klein triology, beginning with A Thousand Tiny Wings was very much in the mould of the New Adventures, with all their sense of tragedy and moral complexity. The new Klein triology, on the other hand, has all the worst excesses of Moffat-Who. Klein has become a cosmic pixie girl, a Teutonic Amy Pond, a fifty-year old Clara or a less flirtatious River Song. Klein has ceased to be a person and has become a walking plot device.

Dominion largely avoided delving into Klein's backstory. Instead, we got a glimpse of a new and different Klein. The character we met in Dominion had the potential to be developed and to become interesting in her own right, aside from her complex backstory. This character was squandered by the writers of the new trilogy. Character development is not about adding new details to a character's background. Character development is not about creating puzzles for listeners to solve. Character development is about seeing how the narrative shapes the character and how the character moves forward the narrative through her actions. Moffat does not get this and it seems the writers of Big Finish are following his poor example. There was a nice moment when Klein accuses Dr. Who of ignoring the person she is and refusing to acknowledge her as a character distinct from what she was in a previous timeline, but such moments are largely absent from Daleks Among Us.

One of the things that can be admired most about the original Klein trilogy was its moral depth and the complex interplay between the Doctor and Klein. We have none of this here. What is more, the Klein trilogy was free from irritating cartoon Nazis. Here in the Persausion trilogy we have Schulke and also Klein's clone-mother Elizabet Wolfenhart, one of the most cliched portrayal of a female Nazi she-wolf ever.

Thankfully, Klein survives this story and we can hope that better writers will do new and exciting things with the character. Tracey Childs is a brilliant actress and Big Finish know that her portrayal of Klein is one of their best creations. I'll also try and get over my Klein fixation and point out that it was nice to see Terry Molloy reunited with Sylvester McCoy. As tired as the character of Davros has become, Molloy can always be relied upon to put in a great performance.

Posted by Matthew Celestine at 10:38