I Destroy Therefore I Am: The Three Doctors 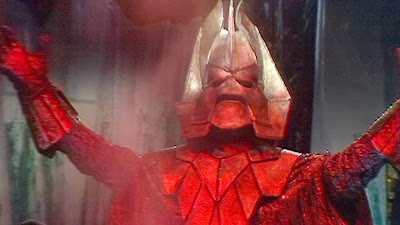 "If I survive only by my will, then my will is to destroy!"

It was perhaps unfortunate that before watching The Three Doctors at the age of ten, I had read the Target novelization. It was disappointing that the Gell Guards did not form into one tentacled mass, as they did in the novel, nor was Omega's palace a fantastic castle, but instead a makeshift door in a quarry. While in the book, the Third Doctor was transported into a giant gladiatorial arena to battle a hideous demonic creature rather like the Destroyer in Battlefield, Pertwee instead wrestled a man in a sequinned catsuit. Thankfully this discovery of the limitations of BBC special effects did not spoil my enjoyment of the serial and they still do not twenty-two years later.

The first Doctor Who story I ever watched was The Five Doctors, so I'm rather used to seeing more than one Dr. Who around. It is hard to imagine what a treat it must have been for the original viewers to see Troughton, Hartnell and Pertwee sharing the screen. The celebration is rather marred by the sadly unwell state of Hartnell, who can only deliver a few lines from a chair. It is impossible not to notice how Troughton's acting outshines Pertwee's. Quite a few of the original viewers must have been wishing that Troughton had stuck around a bit longer.

Like the stories of Season 18, The Three Doctors seamlessly blends hard science with mysticism. It is striking that the story offers a three-decker model of the universe, with UNIT on Earth, the Time Lords in their heaven and Omega in his hellish Pandemonium beyond the black hole. The writers have quite clearly borrowed liberally from William Blake as is demonstrated in Phil Sandifer's beautiful, but barely comprehensible essay on the serial.

I just adore Stephen Thorne's performance as Omega. Doctor Who has plenty of baddies who shout and rant, but Thorne takes it up to a new level. His voice is so rich, even when he speaks softly, his voice booms. I found him rather scary when I fist watched The Three Doctors. He is helped in his performance by the brilliantly designed mask. With its hollow mouth and eyes, emotion can be projected on to it. Depending on Thorne's delivery, the mask looks angry, disdainful, haughty or sad. Omega truly comes across as a pitiable figure. 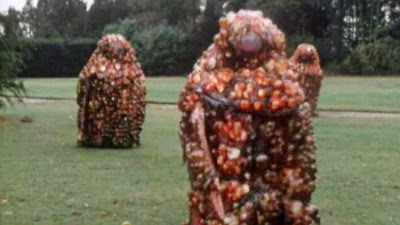 The Gell Guards have come in for a lot of criticism. While they look a little comical at times, I do like their appearance. They are how I imagine H.P. Lovecraft;s Shoggoths in At the Mountains of Madness. Admittedly, Katy Manning's Gell Guard vocal contributions on the DVD commentary is very funny. The blog creature is one of those less effective Seventies CSO effects. It looks good when going down drains, but when it becomes larger, it is less impressive. Omega's palace is interesting visually, despite looking a little unconvincing. Perhaps the stagey looks is appropriate given the story's Christmas pantomime feel.

While Brigadier Lethbridge-Stewart is rather funny in this story, it is unfortunate that he has become such a figure of fun. He is ridiculously obstinate and pig-headed in The Three Doctors. On the other hand, it is interesting how unhinged he seems to become throughout the story. Was his mental health deteriorating? Mawdryn Undead has the Brigadier undergoing a breakdown. This is explained in-story as a result of the timestreams crossing, but had he already suffered trauma as a result of this experience and others? It would explain the quiet and unglamorous circumstances of his retirement that seems to bother some fans for some reason. He was never meant to be a companion and seems to be seriously effected by TARDIS travel.

Jo Grant seems to have overdosed on Cute and Fluffy pills in The Three Doctors. She might as well be one of those generic anime cute girls that people love to draw on DeviantArt.

As with The Five Doctors, it is implied that the First Doctor is older and wiser than the other Doctors. This does not really fit with the First Doctor era, in which he appears to be a lot less mature and less able to handle situations than his successors. This might be explained if The Infinity Doctors is a pre-Unearthly Child story, featuring a younger Hartnell Doctor. It may be that the First Doctor, unlike the other two, has some memory of the encounter with Omega in The Infinity Doctors and can understand the situation better.

This was a celebration of Doctor Who, but in many ways this is a celebration of the Barry Letts era, with all of the usual tropes- Ineffectual UNIT, excessive CSO, blobby monsters, a bumbling scientist, a yokel and the Time Lords needing Dr. Who's assistance. It is held together by an interesting story. In my judgement, it is a lot better than The Five Doctors which was just a collection of set pieces artfully, but not altogether convincingly scraped together by Terrance Dicks. While I can't bring myself to dislike The Five Doctors, I genuinely do like The Three Doctors and consider it to be one of the more enjoyable stories of the Pertwee era.

Posted by Matthew Celestine at 06:05