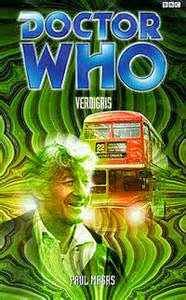 I think Verdigris demonstrates that there is a difference between good writing and good stories.

Some of the writing in this novel is absolutely fantastic. Paul Magrs vividly recreates the Pertwee Doctor, along with Jo Grant. His satirical portrayal of the Pertwee era is very funny, with his lampooning of unconvincing monsters and bad CSO, the lack of characterisation of Mike Yates and the uselessness of the UNIT. This is not as hilariously funny as Mad Dogs and Englishmen, but the writing here is very entertaining.

On the other hand, while the writing is great, the story is not so good at all. The story is basically a sequence of one weird event after another, without much of a semblance of a plot. At times the tone feels altogether too silly. There is a place for silliness in Doctor Who sometimes. Magrs' Mad Dogs and Englishmen was silly, but it felt altogether more grounded than this work. It probably helped in Mad Dogs that Iris took more of a backseat in that story, whereas here she is central to the story.

I am one of those fans who enjoy Iris Wildthyme. I found it surprising how Magrs made her much more obnoxious and unpleasant in this story than in other works. This was perhaps appropriate given how obnoxious the Pertwee Doctor could be. I actually found that pairing the Third Doctor with Iris rather made him a little more likable.

I very much enjoyed the first few chapters of this novel, but halfway through I became very frustrated by the lack of plot progression. This is definitely not Magrs best novel.


Posted by Matthew Celestine at 05:49