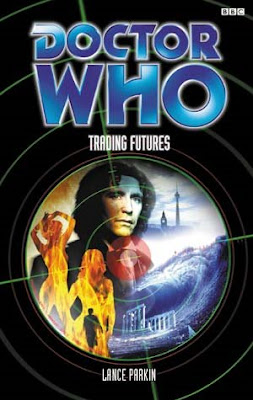 The Troughton serial Enemy of the World is set in the early years of the Twenty-first century and is possibly the Doctor Who story most heavily influenced by the James Bond movies. Lance Parkin's Trading Futures is also set in the early Twenty-first century, just years before Enemy of the World. Appropriately, Trading Futures is from cover to back a homage to James Bond in all its glory. This novel has some of the key ingredients of James Bond, non-stop action, multiple locations, a sexy female spy (with the amusing name Malady), a girl in a bikini (in this case Dr. Who's companion Anji Kapoor) and lots of devious scheming. There is also a British agent called Jonah Cosgrove, who is clearly intended as an elderly version of James Bond.

This story is very much focused on Anji. She takes on an almost Doctorish role, effortlessly gliding through the adventure, improvising at every problem. She seems completely at home and at ease in this environment; only decades away from her own time and guided by the assumptions of markets and capitalism. I love Anji. Being a Tory and a right-winger, I'm inevitably going to like a character who is a capitalist who supports the establishment. It's remarkable how much Anji stands out in Doctor Who because of her contrasting values. This is especially striking in this novel when she defends the arms trade. I can't imagine any other companion expressing such sentiments. Even if the Brigadier probably would agree with her, writers would never have a beloved character like him defending the arms industry. Anji offered a right-wing diversion in a franchise that was consciously left-leaning. Of course, it would be awful to have a character like Anji in Moffat-Who. Doctor Who has turned into a show that is essentially conservative due to the unreservedly middle-class nature of its characters and assumptions. It has nothing to offer in the way of challenging society. As much as I am a Conservative, I prefer Doctor Who being left-wing, rather than having absolutely nothing to say except middle-class sentiments.

Both the Doctor and Fitz take a back seat in this story. Despite his secondary role, the Doctor is portrayed here as an unstoppable, seemingly indestructible whirlwind of energy. Fitz gets a really memorable role in this novel when he is mistaken by aliens as the Doctor. He does an absolutely fantastic job of improvising as a Doctor-stand in, attempting to say Doctorish things. It is remarkable that no other companion (that I'm aware of) ever got to do this.

Lance Parkin had me in fits of laughter with this book's warlike alien race, the Onihr. The Rhinoceros-like Onihr are deliberately portrayed as a bogstandard naff Doctor Who alien species. In a really Monty Pythonesque scene, they torture Fitz with a rubbish torture device called a 'Pain Inducer.' They even change into scarlet cardinal-like robes before operating it.

Despite my enjoying Trading Futures immensely, I did feel it had two problems. The first was the excessive number of factions at work. I don't think the two minions of Sabbath contributed anything useful to the plot. They could easily have been dispensed with, but seemed to have been brought in to keep up with the story arc about the villainous Sabbath. Secondly, speaking of villains, I think a story that emulates James Bond needs a much stronger villain. Baskerville is not particularly memorable and never captures the glamour and style of a Bond villain.

Posted by Matthew Celestine at 04:28