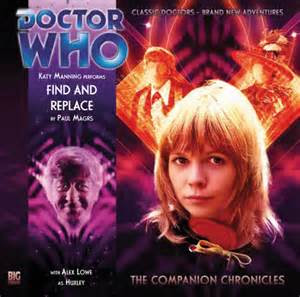 Having experienced the disappointment of another white male being cast as Dr. Who, it was refreshing to get some Iris Wildthyme. The eccentric female Time Lady (?) is played by Katy Manning, and so with Katy resuming her old role as Jo, she effectively plays two parts, as well as voicing the Third Doctor when he appears.

I really don't care much for the character of Jo Grant, nor am I a fan of the Pertwee era, yet somehow I am drawn to the Companion Chronicles featuring Jo. Perhaps I appreciate the earnestness with which Katy Manning performs them, as well as the creativity with which the writers approach this popular, but difficult era of Doctor Who.

The beautiful cover tells you that you are in for a nostalgia trip on this audio. Indeed, this is very much a passionate celebration of the Pertwee era. You can just feel Katy Manning's delight in her memories of the show as she performs here. When Jo describes the feel of Dr. Who's velvet coat, one feels this is just as much Katy Manning's feeling as the character she is playing. The affection and tenderness displayed in the final parting scene between Jo and the Third Doctor is heartbreaking.


The premise of this story is that Jo, having been parted from the Doctor for over twenty years, bumps into Huxley, a creature called a Novelizer. This Novelizer informs her that her memories have been corrupted. She never knew the Doctor and had instead been a companion of Iris Wildthyme, while assisting MIAOW, the Ministry for Intrusions and Ontological Wonders. Both Jo and Iris are sceptical of this claim and travel back to the 'Seventies' to prove Huxley wrong.

There are so many great elements to this story; the nostalgic affection for the show's past, the fact that every line uttered by Katy as Iris is hilarious and the Novelizer's constant and breathless narration. I have only two real complaints about this story. Firstly, I object to the Pertwee era being called the 'Seventies.' I think those stories were set in the 1980s. Admittedly though, this story rightfully reflects the strong 70s character of the era. I also find it disappointing that Paul Magrs has ostensibly contradicted and effectively upstaged his novel, Verdigris, in which Jo meets Iris. Nevertheless, despite these complaints I found Find and Replace a truly enjoyable and heartwarming listen.

Posted by Matthew Celestine at 11:13